The Dell Streak is designed to hit a 'sweet spot' between smartphones and tablets. But will it be able to challenge Apple's iPad? 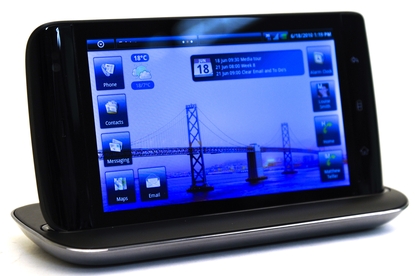 The Dell Streak is an easy to use tablet-cum-smartphone that benefits from the simplicity of the Android OS. Unfortunately, this hybrid device feels unfinished due to the older Android 1.6 operating system it runs, and its odd size may make it too big for a phone yet too small for a tablet. Ultimately, the Dell Streak is an impressive, lust-worthy gadget but we can't justify shelling out for it just yet. Watch this space.

Dell's 5in, Android-powered Streak tablet may look like a huge smartphone, and you can make phone calls on it, but its form factor means it sits somewhere between a largish touchscreen handset like the HTC Desire and Apple's iPad tablet. This tablet-cum-smartphone is a stylish, lust-worthy gadget but ultimately has too many niggling flaws to recommend — chief among them is that it runs the older Android 1.6 operating system.

Check out our Dell Streak vs iPad tablet showdown.

The Dell Streak is officially available in Australia through Optus, and is also sold outright for $649.

The Dell Streak is designed to hit a 'sweet spot' between typical touchscreen-equipped smartphones and tablets. You could use it for phone calls but at 15cm wide you wouldn't want to be holding it up to your ear all the time. That being said, it is reasonably small for a tablet and is stunningly thin for a device with a screen this size. In fact, the Streak is just ever so slightly thicker than the iPhone 4's 9.3mm.

Dell has managed to squeeze an excellent 5in capacitive touchscreen into the Streak and the display is excellent for browsing photos, viewing movies, navigating the Web and reading e-books. The smaller size means the Streak is easier to carry than the iPad, while the screen is very responsive to finger taps. You would be hard pressed to squeeze the Streak into the pocket of tight jeans, and it would be uncomfortable in normal pants when walking up stairs. Generally, however, the Streak is pretty portable and should fit snugly inside the pockets of most suit jackets.

The majority of input is achieved via the Streak's touchscreen but Dell has also included Android's standard touch-sensitive buttons on the right side (back, menu, home), as well as physical volume, power/screen lock and camera buttons on the top, along with a standard 3.5mm headphone jack. 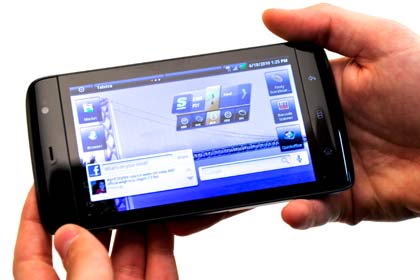 The Dell Streak runs a version of Google's Android operating system that has been slightly modified to suit the larger display. Unfortunately, it's the 1.6 version of the OS and not the latest 2.2 version (called Froyo). Dell has stated the Streak will be upgradeable to 2.2 but has not specified a timeframe for this. Casual users won't be affected too much — Dell has added multitouch capabilities to the Streak despite the older version of Android not supporting this feature. The main gripe with running 1.6 is that many Android applications aren't supported; for example, the official Twitter app can't be downloaded nor can a number of recently released applications.

The Dell Streak's interface is similar the "vanilla" Android UI, but has a number of nice touches that work well with the large screen. Up to four home screens can be used, and the Android notifications bar remains as effective as usual but doesn't take up the whole top of the display. The main menu is accessed via a dropdown box in the far left corner. Commonly used functions like the browser, phone, contacts, Gmail, e-mail and the Android Market are featured in a favourites menu when you press the menu button; another press opens the full menu. Dell also includes its own Facebook and Twitter widgets, but the latter only allows you to read recent tweets and broadcast your own — attempting any other tasks (such as viewing profiles) just takes you straight to the mobile browser.

Outside the home screens, the Dell Streak offers the regular features and functions of Android, including the Android Market for third-party apps and automatic and seamless synchronisation with Google services. Unfortunately, you can't choose to save downloaded apps to the microSD card (this is only available in the 2.2 upgrade).