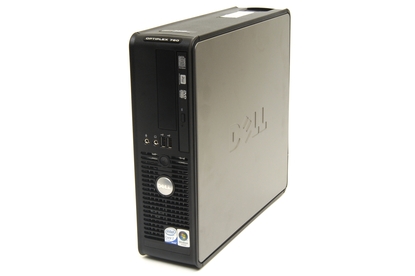 Dell's OptiPlex 760 is a small form factor desktop PC aimed at business users. It has limited expansion options but won't take up too much desk space. This PC provides plenty of power but maintenance is more difficult than with other small form factor systems we've seen.

The Dell OptiPlex 760 is slightly smaller than the Lenovo ThinkCentre M58p but provides similar features. It has two USB ports and microphone/headphone jacks on the front, and there is space for a slimline optical drive and a floppy drive. You can place the OptiPlex 760 desktop PC either horizontally or vertically; you can even swivel the Dell logo on the front to suit the orientation you choose!

On the back panel there are serial, parallel and D-Sub ports, though no PS/2 connections. There are also six USB ports, Gigabit Ethernet, eSATA, DisplayPort and microphone/headphone jacks. You can configure the desktop PC with a DVI add-in card, which occupies the PCI Express x16 slot. Any two of the three display connections can be used for dual-monitor configurations but you can't use all three simultaneously.

A latch on the back frees the side panel to reveal the innards. As you would expect, space inside the case is scarce. Even taking into account the PC's small form factor, maintenance has been made needlessly irritating. The primary hard drive is secured by plastic hooks that attach to the chassis and the air flow cover, preventing vibration from nearby components. However, replacing the drive is tricky as there is nothing to guide the caddy back into the chassis. The slimline optical drive must be removed to reveal the DIMM memory slots, but this too is held in fairly haphazardly through a small latch on the side. Though easy to remove, replacing it requires you to line up small hooks in the correct position, which can be annoying.

Unlike Lenovo's business PCs, Dell's OptiPlex 760 desktop PC has minimal bundled software. Along with Roxio Creator for CD and DVD burning, you also get Dell's ControlPoint software, which manages network connections, password security and system settings. This means you won't have to worry about uninstalling a large number of applications before deploying this PC.

With this configuration, the OptiPlex 760 small form factor PC encoded 53min of WAV files to 192Kbps MP3 in 1min 3sec using iTunes. Blender 3D rendered our test image in 38sec; this is fast even for a quad-core processor. WorldBench 6 yielded a final score of 100, with key strengths being media encoding and multitasking. The most disappointing test was 3DMark06, with the PC scoring 1007 points due to the sluggish performance of the integrated graphics adapter.

The combination of a high-performance CPU and plenty of RAM ensures that this desktop PC can perform multiple tasks simultaneously, but it lacks significant graphics processing power. Dell offers ATI Radeon HD 3450 and ATI Radeon HD 3470 low-profile graphics cards as options, but these are still insufficient for GPU-intensive tasks.

The price tag for our test configuration also includes Dell's 1908FP 19in LCD monitor, which normally retails for $319. This monitor has a 4:3 aspect ratio instead of a widescreen 16:10 aspect ratio, so it doesn’t have extra horizontal space to line up program windows side by side. Nevertheless, the display quality is sufficient for an office environment. The monitor provides sRGB and user customisable colour settings.

Despite having a quad-core CPU, the Dell OptiPlex 760 is quite frugal when it comes to power consumption. When turned off but plugged in the OptiPlex 760 uses 0.8 Watts; it consumes 38W when idle. With all four CPU cores fully utilised the desktop PC consumed a maximum of 74W, which is the same as Lenovo's ThinkCentre M58p.

We would prefer the OptiPlex 760 to have more powerful graphics options. However it is suitable for CPU-intensive tasks. Unfortunately, component replacement and general maintenance won't be a breeze.