The Dell Inspiron Zino HD is a basic, low-cost computer with some media playback capabilities but little else. An HDMI connection means you can connect the nettop PC to televisions easily, but it won't play 1080p high-definition content smoothly.

Dell's Inspiron Zino HD is an attractive, Windows-based nettop that's an alternative to other small form factor PCs like Apple's Mac Mini. It offers plenty of connections and has good performance for basic computing, but slow high-definition video decoding and the lack of a remote control make this a poor home theatre PC.

The Dell Inspiron Zino HD isn't the smallest nettop PC we have seen, but it's definitely one of the most attractive. With a rounded shape and a choice of seven different coloured lids, the PC's styling is svelte and fits in with the modern decor of both home offices and living rooms.

The list of connections is surprisingly comprehensive. The front panel offers two USB 2.0 ports, a headphone jack and an SD/MMC card slot. A DVD burner is also available (a Blu-ray combo drive is optional); we would have preferred a slot-loading DVD drive for better aesthetics.

On the back you'll find microphone and line-out jacks, VGA and HDMI ports, Gigabit Ethernet as well as two eSATA and two more USB 2.0 ports. Wi-Fi and Bluetooth are optional extras.

Nettop PCs are often best used in environments other than the desk, such as in a home theatre setup or as a kiosk in the kitchen. The Inspiron Zino HD ships with a wireless keyboard and mouse, but Dell hasn't seen fit to bundle a remote control with the PC. Avid home theatre users will have to purchase a remote and either use Windows Media Centre or an alternative solution like Boxee for media streaming and playback. 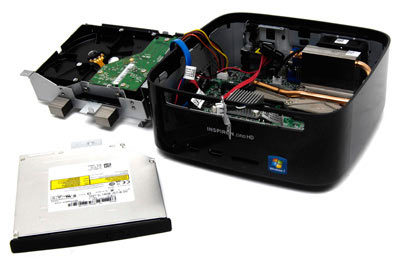 The Dell Inspiron Zino HD is cramped inside but the hard drive is upgradeable.

From a hardware perspective, the Dell Inspiron Zino HD is little more than netbook-like components stuffed into a slightly bigger enclosure without a screen. This means that the nettop PC is geared for basic computing, though offers slightly more memory than netbooks and a 3.5in internal hard drive rather than integrated flash memory or a 2.5in drive. It isn't as upgradeable as tower PCs, but enterprising users should be able to swap out the hard drive for up to 2TB of storage if necessary.

We tested the entry-level, $599 configuration of the Inspiron Zino HD nettop PC, which is powered by a 1.6GHz AMD Athlon 2650e processor, 3GB of DDR2 memory, integrated ATI Radeon HD 3200 graphics and a 250GB hard drive. It runs a 64-bit version of Windows 7. Beefier configurations offer up to 8GB of memory, as well as a choice of faster single and dual-core processors.

As expected, the Dell Inspiron Zino HD nettop PC has slightly better performance than an Atom-powered netbook, though the single-core processor isn't fast or particularly handy for multithreaded applications. Multitasking was the processor's weakest point, taking 1154 seconds to simultaneously perform tasks in Firefox and Windows Media Encoder. The integrated graphics aren't impressive either. While this nettop PC might be okay for Flash-based games, it won't match Ion-based platforms like ASRock's Ion 330HT-BD media centre PC or the HP Mini 311 netbook.

In real world use, we found the Inspiron Zino HD was sluggish when performing even basic tasks like running a CD or installing software. It performed a lot faster when we disabled all start-up applications and services, though this means you won't have access to antivirus or Dell's bundled applications.

The nettop PC's performance also makes it a poor option for a home theatre system. The Inspiron Zino HD repeatedly froze when we attempted to watch 1080p WMV HD files, making movies and even short films unwatchable. We were told that upgrading to the latest AMD Catalyst graphics drivers (10.3) should fix any playback issues, though we weren't able to test this. Despite its "HD" moniker and HDMI connection, it is suitable only for standard-definition content and the odd 720p movie.

Like many netbooks, the Dell Inspiron Zino HD nettop is good as a low-cost solution for basic computing tasks like browsing the Web, checking e-mails and doing homework. It will chug when asked to do anything else, and certainly isn't the "HD" machine that Dell wants you to think it is.