This year's version of the Inspiron 15R gets a touchscreen and an option for fourth-gen Core processing, but not much else 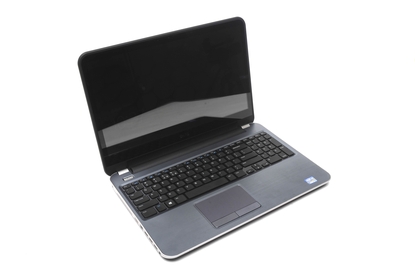 Dell's Inspiron 15R-5521 runs an ultra-low voltage CPU that can supply excellent battery life, though it's a big model that's not easy to travel with. It has a touchscreen and a solid configuration, but it could use much better networking facilities.

The Dell Inspiron 15R is a mainstream notebook that aims to offer a good balance of features, performance and battery life at a competitive price. The most basic configuration starts from $799 ($1149 in New Zealand) and includes a third-generation Intel Core CPU with integrated graphics, while a fourth-generation model is available from $999 ($1249 in New Zealand). The model we're looking at here (the 15R-5521) has a third-generation Core i7 CPU in it, and it offers sensational battery life.

Note: The 15R-5521 model that we've reviewed here is a media sample with a configuration that differs slightly compared to what will be available to buy. Specifically, this third-generation Core i7 model will be offered with an AMD Radeon HD 8730M graphics adapter; alternatively, if you don't need discrete graphics, you can opt for the model that comes with a fourth-generation Intel Core i5-4200U CPU and integrated Intel HD 4400 graphics, though it has less RAM at 6GB, and a smaller hard drive at 750GB.

With a 15.6in form factor, the Inspiron 15R-5521 isn't the easiest notebook to carry on an everyday basis (it's 2.65kg, 380mm long and 260mm wide), but if you've got a good backpack, you could get used to swinging it to and from lectures. Nevertheless, we think it's better off being used at home as a desktop replacement (unless you need something with more powerful graphics processing for running the latest games). The big size has a benefit though, as it makes the 15R-5521 a relatively comfortable notebook to type on; the palm rest is roomy and the keyboard has keys that are soft to hit, with decent travel and bounce.

You don't get any fancy (and useful) features such as backlighting for the keys — they are just black with white lettering printed on them. A number pad has been squeezed in, which should come in handy for those of you who want to use this as an office computer to keep track of expenses or create cutting lists, and there aren't any keys in awkward positions. Everything is normal as far as the layout of the main keyboard is concerned, and even the Page Up/Down, Home and End keys are well placed at the top row of the number pad.

What we're saying is, this is a more than decent notebook to consider if you want a basic model that will be comfortable to type on for long periods of time. The only problem we had with the keyboard was when the right side of the tray seemed to pop up from the chassis. We had to push it down firmly to lock it back in place. We're not sure how it got loose in the first place.

We don't really like the touchpad on this Inspiron model, which sometimes wasn't accurate in its tracking — it felt a little 'jumpy'. It's a large touchpad (100x57mm) with physical left- and right-click buttons, and it does the job for the most part, but there were times during our evaluation where it was frustrating to use: it often skipped ahead or moved off the spot.

You'll have to configure it to your needs before using it proper; mainly, this could mean changing the scroll direction (it's reversed by default, though you have to enable 'Reverse Scroll Direction' to reverse it, if that makes sense), as well as enabling three-finger flicks, and disabling drag lock, which we find to be an annoying feature that's almost always enabled on Dell touchpads. As it's a Windows 8 machine, it supports swipe-in gestures, and these can be performed easily enough.

The 15.6in screen on the Inspiron 15R-5521 has a native resolution of 1366x768. It's a resolution that looks too low on such a big screen, and Dell would have done well to include a Full HD panel on this screen, just like the panel that was included in the Inspiron 15R-5520 that we reviewed last year. The lower resolution can make it easier to tap on tiles and icons, which, as long as you are used to a 'type-and-swipe' experience, can be beneficial. We rarely used the touchscreen on this laptop, though, mainly because we found the back and forth movement of the screen to be annoying every time we tapped it. Our only issue with the screen isn't the resolution, though, it's also the excessive glossiness, and the overall pale output that can make it tiring on the eyes. These issues were somewhat expected on a model that's priced around the $1000 mark.

As for features, the Inspiron 15R-5521 has a built-in DVD burner on the right side, four USB ports (two of them being USB 3.0), an Ethernet port (though it's only 10/100 rather than Gigabit), there is a combination headphone/microphone port, HDMI, and an SD card slot that's located at the very front of the unit and sticks out a little. You get a 1-megapixel webcam, Bluetooth, and Wi-Fi, but it's single-band Wi-Fi (Centrino Wireless-N 2230) rather than dual-band, which is a let-down.

In many ways, the 15R-5521 hasn't progressed much since last year, with the only real addition being the touchscreen we mentioned earlier. In fact, Dell has been a little frugal with this year's model, apart from the touchscreen: the 15R-5520 included a VGA port and its headphone and microphone ports were separate. Dell has also removed the shortcut buttons from the chassis that were present on the previous model.

The configuration that we tested featured a third-generation Intel Core i7-3537U CPU, which has two cores and Hyper-Threading, and a standard frequency of 2GHz. It's surrounded by 8GB of RAM, a 1TB hard drive, and graphics are integrated (Intel HD 4000). The choice of CPU is an interesting one for a notebook that's so physically large. The previous 15R-5520 we saw featured a regular-voltage CPU, while the one in this 15R-5521 is an ultra-low voltage CPU. This means that it's not as fast as last year's model, but it can supply a lot more battery life. (It also means that it's power adapter is very small and similar in size to a typical Ultrabook's adapter).

We saw this in our battery rundown test, in which we disable power management, enable Wi-Fi, maximise screen brightness, and loop an Xvid-encoded video. The Inspiron 15R-5521 with its 6-cell, 65 Watt-hour battery lasted 5hr 8min. This is an improvement of almost three hours over last year's model when using its integrated graphics (that model had switchable graphics, whereas the model we are looking at here only has the integrated Intel graphics). If you're after a big laptop that can last a long time away from a power outlet, then a 15R-5521 with integrated graphics is for you. We imagine the fourth-gen Core i5-4200U version will offer even more battery life.

Speed wasn't much of an issue for us when using this laptop for everyday tasks. It was responsive enough when launching and switching applications, and it produced expected results in our benchmarks. In our Blender 3D rendering test, it recorded 40sec; in our iTunes MP3 encoding test, it recorded 52sec; in our HandBrake DVD-to-MP4 conversion test, it took 19min 28sec. All of these results point to a system that's very capable of handling school and office work, and even multimedia tasks such as ripping CDs, converting movie files, and editing photos. It's worth noting that even with an ultra-low voltage CPU and a thick chassis, the laptop's fan did get noticeably loud during heavy workloads.

You can't really use this machine for gaming. Its Intel HD 4000 graphics recorded 5927 in 3DMark06, while in the latest 3DMark, it got 40639 in the Ice Storm test, 4108 in the Cloud gate test, and 565 in the Fire Strike test. You can play basic games and older games on this laptop, but many of the latest games will struggle. There are versions of the 15R-5521 available that have AMD Radeon HD 8730M graphics, which offer better 3D performance for gaming.

Storage is handled by a 1TB hard drive that has a spin speed of 5400rpm. It's not a fast drive, and this was shown in CrystalDiskMark in which it achieved a read rate of 103.5 megabytes per second (MBps), and a write rate of 100.6MBps. However, the system's cold boot time was quick, taking between 15-21sec to get to the Windows login screen during multiple tests. Resume time from sleep was almost instant, though sometimes the system stalled prior to showing us the login screen.

There isn't a lot more to say about the Dell Inspiron 15R-5521, other than it's a basic machine for families and students to consider. The touchscreen can come in useful when using the Windows 8 Modern UI, and the overall speed is fine for typical home and small office tasks. You also get enough ports along the edges that will allow for plugging in external storage and a bigger display.

A few things about the Inspiron 15R-5521 are indicative of its position in the market as a low-cost/value option, such as the quality of the screen, the jumpy touchpad, the lack of Gigabit Ethernet, and the lack of dual-band Wi-Fi. If you can put up with the limited networking facilities, the hit-and-miss touchpad, and the underdone screen, then go for it. After all, its battery life is good, it can supply fast performance, and it's comfortable to type on as far as mainstream notebooks are concerned.