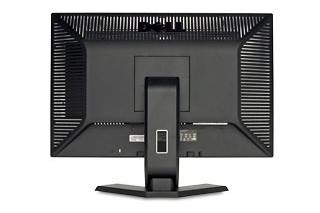 In a nutshell, Dell's E228WFP is a no-frills monitor that offers solid performance.

It won't win any design awards, but Dell's basic 22in widescreen monitor can do yeoman service in an office setting, delivering high-quality text and graphics.

Our jury had few complaints when viewing Word and Excel documents on the E228WFP. Toolbar icons and the text itself were clear and sharp. We looked at several types of graphics on the monitor, including common Web page graphics, images of colourful fruit, and a picture of a diverse group of people. Here again, the jury admired the monitor's performance. Colours in objects popped, and the people's skin tones in the group photo looked natural.

Like many Dell monitors, this one has a boomerang-shaped black and silver stand. Perhaps taking a cue from Apple, Dell has drilled a small rectangular hole in the monitor stand, to permit several cords to pass through. Though it can be a little tight (because the hole is rather narrow), it keeps cables out of sight very effectively.

In a screening of Pirates of the Caribbean: The Curse of the Black Pearl, the monitor produced excellent greens in background trees and shrubbery. Dark background detail was easily discernible in everything from moss-covered walls to rock formations. However, in some lighter scenes -- particularly those shot in direct sunlight -- colour tended to blow out. Reds were a tad oversaturated, especially in soldiers' uniforms, and darker skin tones showed a bit too much orange. But overall, the monitor did a very capable job of reproducing the movie on its relatively small screen.

Five aspirin-size silvery plastic buttons on the lower right-hand side of the monitor offer navigation for the on-screen display (OSD). Icons on the menu can be tricky to decipher, but they allow extensive control over colour, brightness and contrast once you figure them out.