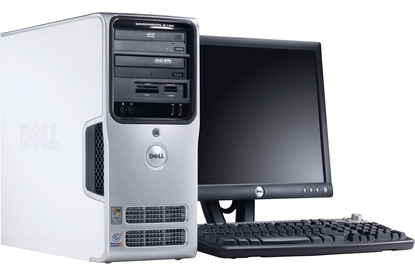 The fast CPU provided the best application performance in the review, and the new BTX case really does cool the entire system efficiently, although our model had no way for us to control the fan speed.

The 5100 we tested gave us our first glimpse of what a BTX form factor system will look like. And, so far, it looks good.

Dell is always among the first vendors to implement new technology into its systems and the BTX form factor, which has been devised by Intel, is a design that essentially "flips" the location of the motherboard and its components. All components are now installed from the right-hand side of the case, instead of the left (as in the ATX form factor), and a BTX motherboard has its CPU socket towards the front of the board so that it resides directly in front of the case's air intake. And the air intake on the 5100 sure is big!

In addition to cooling the CPU, the airflow from this intake passes over the hard drive bay to keep your drives cool, and the directed airflow also passes over the graphics card before it exits via the rear vent. Dell has installed a large and powerful fan for this cooling task and it pretty much leaves no chance for this system to fail due to a heat-related issue.

The base of the 5100 range of systems is an Intel 945G chipset-based motherboard, which has a PCIe graphics slot and four memory slots. It does not come with FireWire as standard and it lacks legacy ports, which is not a problem unless you have parallel or serial devices that you want to use with it. While you can use Dell's Web site or phone ordering service to customise your component configuration, the PC we tested had a 3.4GHz Pentium 4 550 CPU with 512MB of DDR2 RAM and an 80GB Serial ATA hard drive. It also had a modest ATI Radeon X300 graphics card, a double-layer DVD burner and a DVD-ROM/CD-RW combo drive. This setup costs approximately $2000 without a monitor. In our tests, the machine produced reliable and quick results, which can be attributed to its 3.4GHz CPU clock speed. If you are interested in gaming, the mainstream Radeon X300 graphics card should be replaced by a more powerful one, such as the GeForce 6800. This will give you much better performance when playing highly detailed games such as Doom 3 and FarCry.