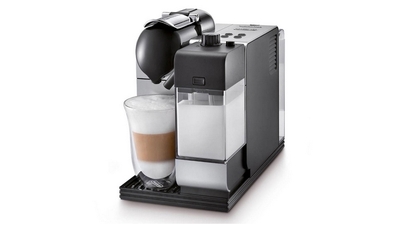 De' Longhi's Lattissima+ is a Nespresso capsule-based espresso machine that will pour you a coffee with the greatest of ease. It's a self-contained unit with a minimal learning curve that's perfect for those of you who want to make a cappuccino or latte macchiato in your home, and you can do so simply by pressing one button.

This machine represents a couple of things: consistency and convenience. You can be sure that every coffee you make will have the same taste, and you can make that same coffee in very few steps and within a couple of minutes. It takes the hustle out of the morning ritual, and leaves very little for you to clean up afterwards.

The size of the machine is compact. In fact, it's impressively small considering it can dispense both the coffee and the froth, but it will still take up valuable real estate on a kitchen bench. This will be a problem if you have a small kitchen. If you're both a coffee addict and a proponent of convenience, then there will be no better use of bench space than this coffee machine. If you're just a casual coffee drinker (like this reviewer), then you'll constantly be shifting this thing around to make space for other stuff.

It's not the type of machine to pack away after it has been used. It's the type of machine that requires a permanent place in a kitchen, becoming one of its go-to facilities. There isn't much to it apart from a 900ml water tank at the back, a 350ml milk tank at the front (otherwise known as a Rapid Cappuccino System), and a power cord that needs to find its way to the nearest outlet. Capsules are inserted at the top, and water flows through them at 19-bar pressure. This pressure causes an almighty racket that's brief, but nevertheless startling to the uninitiated.

Before you start using the Lattissima+, you need to choose some capsules. There is a wide selection at your local Nespresso outlet, and that's where the fun can be had as you eventually settle on a favourite flavour and strength. Do you have to be a coffee lover to enjoy this machine? This reviewer thinks you do. If you're not, you'll have to learn a bit about what espresso and lungo shots mean (espresso are short while lungo are long shots of coffee), and whether you want to go for a cappuccino or latte macchiato, as these are the four buttons present on this particular machine.

Even though the machine is billed as a one-touch master, it still allows for some customisation to the drinks, which can be made by holding down particular buttons until you get more water or milk, as per your taste. These new levels will then be programmed into the machine for one-touch operations.

We won't go into the way the coffee tastes, as that is a highly personal area, but we will say that making a cappuccino with this machine proved to be a cinch -- after some practice. We just dropped in the capsule, added milk to the tank (the recommendation in the manual is for skim milk, but we liked using regular milk instead), adjusted the control for the froth to a minimal level, and that was the extent of user interaction required by this task.

For our testing, we were sent a bunch of decaf capsules. It was a critical error made by the public relations person, we thought. In the end, we enjoyed the caffeine-free capsules for the fact that we could make a cup at any time of the night and still be able to fall asleep afterwards. The taste was something we enjoyed. That said, we still went out and bought some Roma capsules.

It's a machine with a design that is compact, but above all, neat. From its internal collection of used capsules (they just drop when you lift the lever) to the milk steamer and adjustable froth control, there is plenty to like about the way in which this machine does its business. You don't have to worry about pouring too much milk into the container; the container can be easily removed and placed in the fridge so that you can use it all up another time. The water reservoir at the back can be lifted off the machine by its lid when it's time to rinse and refill. You don't even have to worry about forgetting the machine switched on; it has a power-off mode that kicks in after nine minutes.

Maintenance is limited to emptying (and cleaning) the container of the used capsules (it holds up to nine) and cleaning the grille or grooves below the cup area if all you are making is straight shots of espresso or lungo. After making a cappuccino or latte macchiato, you will also have to press the cleaning button to rinse the milk dispenser's pipes after each drink. The external surfaces will suffice with a thorough wipe from a cloth. Every couple of days, you will also have to dismantle the milk dispenser and give it a proper wash.

With the use of capsules, one thing becomes immediately clear: this machine has the potential to produce a lot of waste. Even though they are made from aluminium in a way that can withstand the temperature of the water and maintain the flavour of the blends, the capsules can't be recycled in the same fashion as other recyclables. Instead, they need to be taken back to a Nespresso store or participating outlet in order to be properly processed.

This could be one step too far for many consumers, but Nespresso offers stylish accessories that can be used for the carriage of the used capsules. Hopefully that makes it less of a chore to hold onto the used capsules and dispose of them properly on each weekly visit to the shops. This reviewer sadly admits that the test capsules went in the bin instead, but promises that if he ever buys such a machine and uses capsules on a daily basis, they will definitely get taken back for recycling.

Pick up this machine or a similar one (this one has been discontinued but can still be found in some shops, and the latest Lattissima has six buttons for a little more variety) if you’re after a quick and easy way to make a cappuccino at home, and if you know you’ll get a lot of use out of it. It’s simple to operate and doesn’t require too much maintenance.