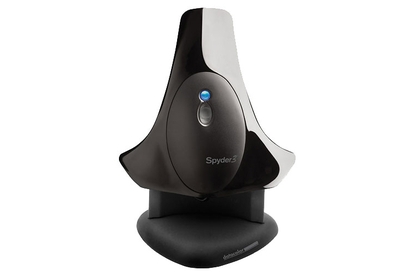 If you don't want one of the all-in-one monitor and printer calibration solutions, the Spyder3Elite is a well-priced choice.

Over the past year we've seen plenty of innovation in the colour-calibration market, with the emergence of combination monitor-and-printer calibration systems such as Pantone's ColorMunki and the Colour Confidence Profiler. The ColorMunki is also capable of being used as a real-world Eyedropper tool.

The Spyder3Elite eschews the trend, in favour of a higher-grade of monitor calibration — though it is available in a bundle with the Spyder3Print printer calibrator as the Spyder3Studio. It has some innovations of its own, but overall it's essentially an upgraded version of the Spyder2.

The Spyder3 device has a larger measurement area and is 400 per cent more sensitive than the previous model — and is of a higher grade than most of its rivals, based on Datacolour's quoted stats.

The company has given the Spyder's design an overhaul, keeping the 'alien spaceship' shape of the Spyder2 but ditching the dull grey and black design for a high-reflective metal finish that looks like an intriguingly geeky desk ornament.

You may want to keep the Spyder3Elite on your desk at all times, as it features an ambient light sensor on its front. This is used during calibration, but can be set to be always on using the software's advanced tools — so it adjusts your monitor to lighting changes in your studio automatically. Considering the British weather, this could be a very useful function.

The Spyder3Elite software is excellent. It's a straight-down-the-line monitor calibration tool, with simple and advanced modes. The advanced mode offers a huge amount of control to match different studio lighting conditions and gamma curves — including Cineon for post-production of telecined film stock.

The software also includes the StudioMatch Assistant, so multiple displays can be calibrated to match each other — essentially limiting their palettes to the weakest one.