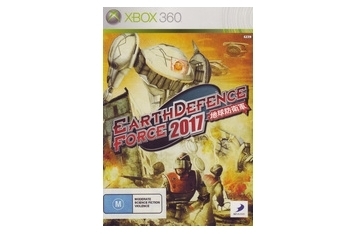 If you like you video games big, violent and dumb, there's a lot of enjoyment to be had from Earth Defence Force 2017.

Earth Defense force is one of those video game equivalents of a B Hollywood movie. Thankfully it's one of those B movies that realizes what it is and revels in its own cheesiness: It doesn't trouble itself with a serious plot--aliens are invading and it's your job to blow them up.

Also reminiscent of B-movies are the frame rate issues, repetitive and bland environments, and an overall lack of visual polish. But just like watching some of those cheesy movies that come on at 3 AM on HBO, this game is a lot of fun to play if you check most of your loftier expectations at the door.

Shoot 'em All Up

EDF is a 3rd person shooter, and never has the term shooter been more apt. There are no switches to push, key cards to collect, or puzzles to solve. Your objective in every one of the 54 levels is to blow up every single alien you come across, usually with the aid of a squad or two of AI companions. Enemies range from giant ants and spiders to huge robots and UFOs. Luckily, blasting them to bits is tons of fun thanks to the huge variety of weapons at your disposal--with infinite ammo for the vast majority of the weapons--and the fire-power you wield is some of the most devastating you will ever see in a video game.

Before each mission you select two weapons to take with you. Your arsenal grows as defeated foes randomly drop weapons in the form of old school 2D power up icons. The quality of weapons you find is based on what difficulty level you're playing on, which encourages repeated playthroughs of previous levels. Additionally there are "armor" power ups that permanently increase your maximum health. These mechanics encourage an enjoyable--if shallow--MMO-style grind that increases replay value.

As fun as EDF is most of the time, it will frequently frustrate you as well. The frame rate stutters when numerous of enemies are on screen and one or two inevitably will wander away from the main battle area, requiring you trek across the huge map for a few minutes to hunt them down. Your fellow squad members NEVER stop babbling and controlling vehicles is physically painful and actually reduces your mobility and firepower compared to when you're on foot--just to name a few frustrating moments.

As fun as hurling dozens of rockets at a time into a swarm of giant alien ants is, it will get boring after a few hours. If you're up for a shallow yet addictive and gratuitously violent shooter, you can't go wrong with Earth Defense Force. Just take a break every few hours and read a book to rebuild some of the higher brain function you just lost.