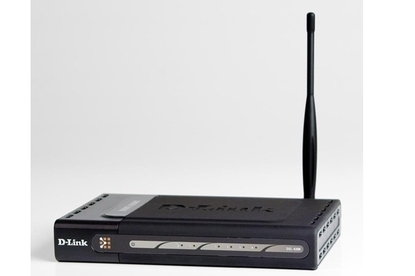 If you take your gaming seriously and have more than one computer with a gigabit Ethernet port, D-Link's DGL-4300 is a good bet.

Online gaming places a hefty load on your Internet connection and associated hardware. Online competitions can be won or lost in the blink of an eye, and a dropped packet at the wrong moment could mean all the difference between a resounding victory or crushing defeat

D-Link's DGL-4300 Wireless 108G Gaming Router is designed to prioritise gaming packets over regular network traffic to keep gaming pings low and give you every chance in frag-fests. D-Link is making an aggressive attack on the gaming market and has released a GamerLounge range of products customised for the gaming community.

The black and grey DGL-4300 measures 19.5 x 13 x 3.5cm and includes a handy diagram on the bottom to indicate cable connections along with an LED legend to help troubleshoot the front panel. The rear fascia serves up a single SNA antenna connector, four gigabit LAN ports and one WAN port to connect to either another network device or a broadband modem.

The router itself can be plugged into four devices via Ethernet cable, but also provides a wireless network to share an Internet connection between wireless devices like notebooks, PDAs or wireless gaming consoles. Though the device comes with a printed quick install guide, there's no bound manual to speak of. Instead users have to rely on the software manual on the CD-ROM in case of emergency. That said, the quick install guide is well laid out and written, and there's every chance that you won't have to delve into the CD-ROM until you go to set up security. Unfortunately, the quick install guide only pays a passing mention to security and you have to go to the manual to get adequate protection up and running.

The router's web interface is well laid out and easy to follow, and there are plenty of advanced settings there for those that want to customise the routing functions. A bundled stateful packet inspection (SPI) firewall is included along with basic network address translation (NAT) to help keep out attackers, and the device fully supports a VPN pass-through. From a security perspective, both WPA and 128-bit WEP are supported, further locking down the network.

The DGL-4300 offers a 108g Wi-Fi connection for compatible devices. Many different hardware manufacturers are releasing devices that operate at claimed speeds of up to 108mbit/s using channel bonding technology. Essentially these devices are able to use two separate 802.11g channels simultaneously to boost speeds beyond the theoretical 54mbit/s capability of 802.11g. In reality, while there is a substantial speed improvement from 802.11g to 108g, the performance is nowhere near double that of the slower technology. In fact, 108g networks are generally around 30-40% faster than conventional 802.11g.

In testing, the D-Link model performed well, achieving consistently high data transfer rates when tested with a compatible D-Link AirPlus Xtreme G CardBus adapter. The device managed to push data at 41mbit/sec at a range of 5m; a solid result. If you take your gaming pretty seriously, and have a couple of current generation Intel or AMD PCs with gigabit Ethernet connections, the DGL-4300 is a zippy, configurable, capable wireless network router.