The NetGenie is one of the most comprehensive consumer routers we've seen when it comes to Internet filtering features. Its parental filters are excellent, as is the router's stability, which we found out during our long evaluation period. Its wireless speed was good from short range, but suffered a little from mid-range distances.

The NetGenie is a wonderful little router if you're after a model with excellent filtering capabilities. That's primarily what it has been designed for and it allows for a great deal of customisation to be made to its settings as far as blocking undesirable content is concerned. It also offers lots of flexibility when it comes to giving authorised users unfettered access, either via a password protected account or by whitelisting their devices.

It's a small and not altogether conventional looking router, but we don't think it's ugly at all, and it has green status LEDs that aren't harsh on the eyes. Two antennas poke out of the back of the unit to facilitate the router's 802.11n wireless networking capability, but they are not as stiff as they should be. They move out of place very easily, despite being tightly screwed in to their mounts. The NetGenie doesn't have a modem built in to it, so you'll have to supply your own ADSL2+ or cable modem. The device will even distribute a USB-based 3G dongle's Internet connection, which is convenient.

Setting up this router was not very difficult at all. After going in to the NetGenie's clearly laid out Web interface, which has plenty of graphics, getting on the Internet was a breeze. The router detected our iiNet connection quickly and all we had to do was enter our login credentials. Setting up the wireless network was also easy, but the router doesn't support SSIDs with spaces in them, which is unlike most routers we've tested to date.

Once connected to the Internet, the first Web site you visit brings up the NetGenie welcome screen. This reminds you that you need to configure the router for your family members -- after all why else would you buy this router if you have no intention of using its protection settings. 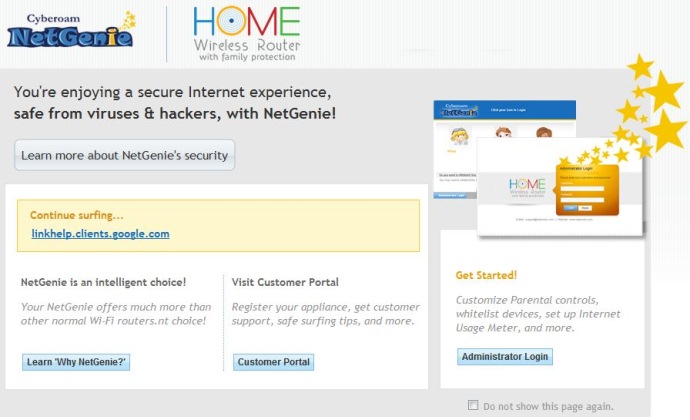 The welcome screen that appears when you first start using the router.

The first thing you need to do is log in as the administrator and add accounts that users can log in to in order to access the Internet and get the level of protection that they require. In our example, we set up accounts for adults, young adults, teenagers, tweens, pre-teen children. The interface for doing this is fairly simple. You can add accounts from the left-hand column. However, every time you add an account, the interface remains on that account's page, which means it's very easy to overwrite that account with the next one you create. 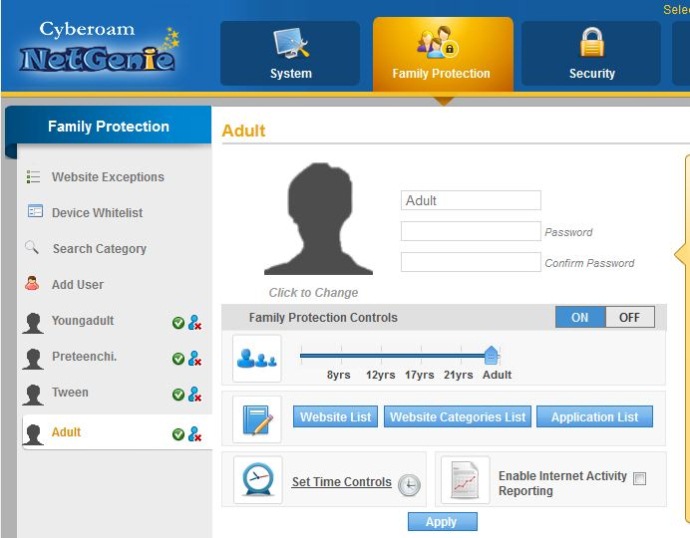 Creating accounts in the NetGenie's interface isn't all that hard. You can use the default settings that are provided, or choose custom protection settings instead.

Each account in the router allows a certain level of access and blocks a differing amount of categories. When users start to browse the Web through the NetGenie, they will be greeted by a screen that requires them to log in. They will see the different account names (or their specific username) and will have to provide the password for that account. 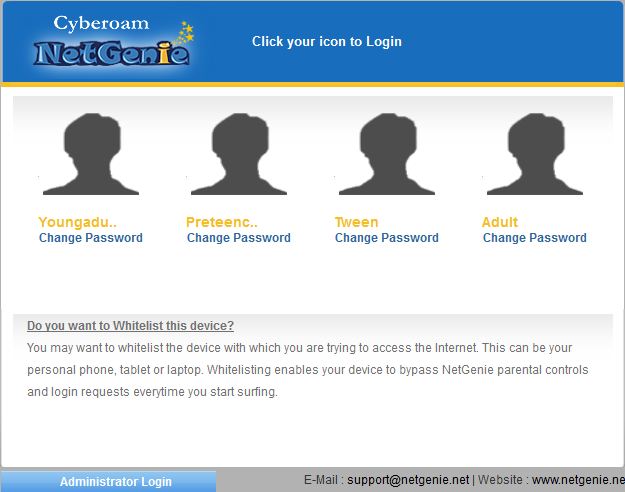 The user login screen that allows for safe Web surfing.

As an example of what NetGenie can do, pre-teen children are automatically blocked from visiting sites such as Flickr, StumbleUpon, Reddit, and even news and sports sites such as SMH and ESPN. Chat applications such as Gchat are also blocked, but email, such as Gmail, is allowed. The good thing about the way NetGenie works is that you can see the categories that it blocks and modify the access if you need to; its filtering is not set in stone. 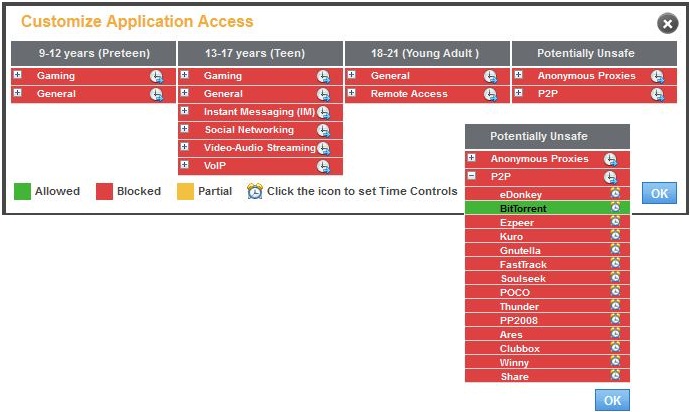 Peer-to-peer, chat and other types of applications can easily be allowed or disallowed in the custom settings.

You can access a log that shows you which sites were blocked, as well as who accessed them and when.

When users try to access sites that are blocked, a screen comes up telling them so and permission to bypass the block can be given by the administrator.

If there are users on your network that require full Internet access and don't need to use the filtering, then their computers can be added to the router's device whitelist. This is easy for the administrator to do as the computer's name will show up in a list of devices that are connected to the network already, from which it can be selected and added to the whitelist. Up to 10 devices are supported.

In addition, it has a built-in firewall, intrusion prevention and anti-virus protection. These features, along with the parental controls mentioned above, are part of a three-year subscription service to the NetGenie service, so you will need to re-up if you want to continue using the service after the expiration period. Three months of free email and phone support is also offered once you register the router.

The security focus of this router is first and foremost, but it's not bad when it comes to performance either. We didn't notice a slow-down in performance as the router worked to filter the content we were accessing and had no problems with sites timing out or not loading properly. We used a Billion BiPAC 5200S RD ADSL2+ modem during our tests, which we plugged in to the router's WAN port. The NetGenie supports cable connections as well, and you can even distribute the Internet connection from a USB-based 3G mobile broadband dongle -- just plug it to the USB port on the side of the router.

A 4-port, 10/100 Ethernet switch is present on the back of the router and it also features two antennas for its 802.11n, 2.4GHz wireless access point. These antennas are quite loose and couldn't always stand at our desired angle during our tests. Nevertheless, the NetGenie showed very good speed in our tests from 2m and 10m. From 2m away, it was able to transfer files at a rate of 9.53 megabytes per second (MBps), which, from this distance, is better than some recent router's we've seen, such as the Linksys X2000, but not quite as fast as the Netgear N600 Premium edition router. From 10m away it averaged a transfer speed of 6.87MBps.

You can see that it did slow down noticeably when transmitting to the longer distance, so it won't be an ideal router for a large home. For comparison, the aforementioned Linksys X2000 recorded 8.8MBps from 10m. That said, for a small home or apartment, the NetGenie will have no problems handling common tasks.

You could send video to a TV-connected video streamer over the wireless network while at the same time distributing a fast ADSL2+ connection, while performing other tasks in the background, such as peer-to-peer downloads, without any problems. Indeed, we used this router extensively for a period of over one month and had no issues with its stability and performance. It never required a reset and its speed never fluctuated unexpectedly in our test environment.

All up, this is a very solid little router that performs well, but, most importantly, has a strong focus on safe Web browsing and good ease of use. It's an ideal product for a family looking to protect their kids from the seedy parts of the Internet, while at the same time not restricting content for other users on the same network. We like it.