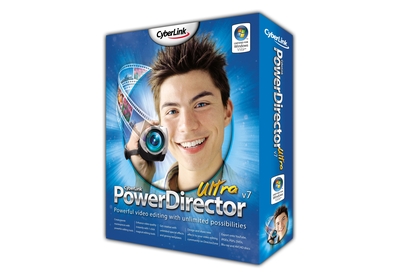 Cyberlink has managed to refine and build upon its entry-level editing suite, delivering a product that will appeal to beginners and semi-professionals alike. With the addition of the DirectorZone database, its value is almost limitless.

If you're the proud owner of a high-definition camcorder, you probably think you're sufficiently equipped to make great looking videos. Think again. More often than not, the difference between a good video and a terrible one comes down to the editing process. This is as true of family home movies as it is of feature-length films. Basically, if you want your story to be entertaining and accessible, it needs to be cut with finesse and spruced up with appropriate effects and transitions — which is where Cyberlink PowerDirector version 7 (Ultra edition) comes in.

This easy-to-use software package offers most of the functionality of a professional editing suite at up to a fifth of the price. From fixing up dodgy looking footage to creating lavishly presented DVDs, the program does everything a casual videographer could possibly want. This latest version adds a host of valuable new features, including advanced disc authoring options, improved auto-correction tools, faster processing times and access to DirectorZone's resource-sharing site. As always, the emphasis is on getting great results as quickly and easily as possible.

As befits a shiny new upgrade, PowerDirector v7 has been overhauled with a redesigned interface. The cheap 'n' cheerful skin found on previous versions has been ditched in favour of a dark grey aesthetic. While this does lend the program a sleeker, more professional look, it also makes it indistinguishable from every other multimedia suite on the market. We kind of miss the previous version's quirky personality, but most users will prefer the fresh new facelift. Another change involves the general layout of the workspace, which is now fully customisable. Each section of the tri-pane interface can be resized to suit your individual workflow.

Otherwise, the program works much like it did before, with the same straightforward and accessible menus. The majority of complex tasks are accompanied by inbuilt wizards to guide you through the process. More adventurous users will be pleased by the inclusion of six independent Picture-in-Picture video tracks. This allows you to create professional overlay effects.

Once again, Cyberlink has included a range of Magic editing tools which automatically enhance your output. From correcting shaky footage to adjusting colour and contrast, the range of tools on offer are quite extensive and surprisingly effective. We purposely shot some horrendous footage and — with just a few mouse clicks — turned it into something halfway decent. This is bound to please PowerDiector's intended user base of casual users, who are unlikely to produce consistently flawless video. Plus, unlike previous versions of the software, you can now apply multiple Magic tools to the same video clip (just in case you're really rubbish).

For those who would prefer to take a back seat to the editing process, PowerDirector v7's Movie Magic Wizard offers instant, fuss-free results. By selecting a theme, movie duration and soundtrack, it is possible to make an effects-filled video in just a handful of minutes (with step-by-step instructions along the way). We found the results to be substantially improved over the previous version, which suffered from an overabundance of cheesy effects. If your friends frequently ask you to make videos of their weddings or birthday parties, this feature will be an absolute godsend.

But it's not all about video editing — PowerDirector v7 is equally proficient at producing photo-based slideshows. The options go well beyond the usual static scrapbooks, with an array of slickly animated 3D templates. You can manually adjust panning and zooming effects, or let the program take care of everything itself. We were particularly impressed by the new beat-detection engine, which automatically syncs a slideshow to any music file. Naturally, some musical genres work better than others, so you may need to experiment with different tracks. (Basically, anything with a repetitive, bass-heavy beat should work fine.)

Cyberlink's latest range of media applications has placed an emphasis on community building and resource sharing, and PowerDirector v7 is no different. Registered users can now gain access to DirectorZone, an online community service exclusive to PowerDirector owners. This is basically a database of user-created content — including animated templates, DVD menus and video effects — which anybody can download and use in their own productions. You can subscribe to different creators and receive updates when they release something new. This will be a huge selling-point for budding filmmakers, who will appreciate the huge array of resources at their fingertips. You can also download royalty-free photos direct from Flickr.com for your slideshows, as well as audio samples from the Freesound Project.

As with the previous version, PowerDirector v7 lets you publish your work directly to YouTube. The interface automatically links to your YouTube account, allowing you to encode and upload videos in a simple and straightforward manner. Authoring DVDs is equally achievable for the novice, complete with slick menu templates that put many store-bought movies to shame. You can even add optional subtitles and commentary tracks.