A powerful, versatile video editor for people who like to work in full-screen mode 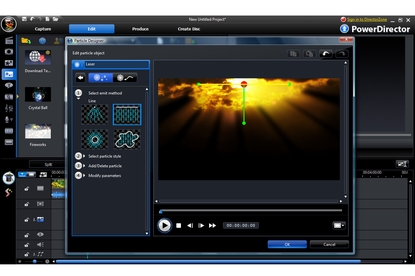 PowerDirector 8's excellent price-to-power ratio is undeniable, so if you aren't bothered by having to work in full-screen mode, go for it.

PowerDirector 8 Ultra is a powerful video editor, and its interface is stylish and friendly--when you work with it in full-screen mode. This latest version of the program introduces a number of usability improvements and new features, most compellingly the TrueTheater video correction and enhancement tool. On the other hand, the upgrade fixes none of the previous version's interface faults, such as its tendency to obscure tools when you run the program at less than full-screen. Since I like to multitask, these drawbacks have begun to grate on me a bit.

I was pleased with the newly resizable panes for Media (where you add files), Preview (where you watch you your movie), and Timeline (where you assemble the movie) in version 8's Edit window. Cyberlink nicely revamped the Produce window (where you select the output format and the location) as well. Formerly presented over a series of three step-through dialog boxes, all options now appear on a single page that fills the main window. Version 8 also reworks the 'Create disc' pane so that you can view the content of the disc--and the menu structure--in tree-diagram form.

Regrettably, due to a lack of scrollbars, if you don't run the program at full-screen, you won't be able to see some critical components. Also, when you set the Windows task bar to hide automatically, PowerDirector blocks access to it, forcing you to click Ctrl-Esc to display it. I gave version 6 and even version 7 a pass on these and other interface problems, expecting Cyberlink to fix them in free updates. The company has assured me that corrective code will finally be available within the next month as a free update.

Welcome new features include TrueTheater HD up-sampling, video stabilization, audio and video denoise tools, motion frame interpolation, three music tracks (up from one in version 7), and nine picture-in-picture tracks (up from six). You also get a new particle FX library for overlaying such elements as snow falling.

PowerDirector 8's excellent price-to-power ratio is undeniable, so if you aren't bothered by having to work in full-screen mode, go for it. Your decision to move up to the latest edition should depend on your need for video enhancements, extra tracks, and particle FX--the usability improvements, while nice, aren't worth it.