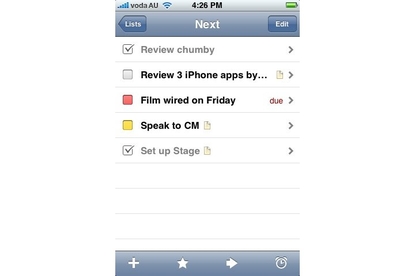 Things gets everything right when it comes to the essential task management app for the iPhone. But at $12.99, users are paying a premium for something that should have been on the iPhone in the first place.

There’s a long list of no-brainer functions that the iPhone lacks, and a to-do list is one of them. Sure, the calendar can fill some of those gaps, but that hasn’t stopped many developers from releasing dedicated to-do apps that attempt to find the right balance between simplicity and functionality. Things is yet another competitor to add to the pile, and it is a worthwhile option.

Things is expensive for a task-management app; at $12.99, it demands an arm and a leg compared to free counterparts that promise to do the same thing. So does Things deserve the high price tag?

The app’s interface is fairly plain but attractive, and melds well with the standard iPhone layout. To-do items are colour coded for convenience, with red demanding the most attention, yellow for upcoming items, and white for those items that do not have an attached due date.

Items are categorised into three main sections: Today, Next and Someday. Along with these are categories like Scheduled, Projects, Logbook and Inbox, which all fill the roles their names suggest. Items are easily added, flagged and moved using three quick access buttons available on the bottom of the screen, facilitating a quick-in, quick-out approach that should definitely suit the time-poor.

Things is designed to work in tandem with its Mac OS X-based desktop counterpart, which has the same name. The two applications will automatically sync between each other over a local wi-fi network, and the desktop version can be configured to sync with iCal.

The cooperation between the iPhone app and its desktop counterpart is the key advantage of the app over competitors, but unfortunately this advantage will be short-lived. The Things desktop client is free until January — when the software officially hits version 1.0 — but when it suddenly costs $US49, the desktop client will suddenly become a lot less enticing, and the iPhone app a lot less useful for most.

However, if you’re willing to pay $12.99 for an app that doesn’t get in your way and facilitates quick and easy task management, this is still a good choice.