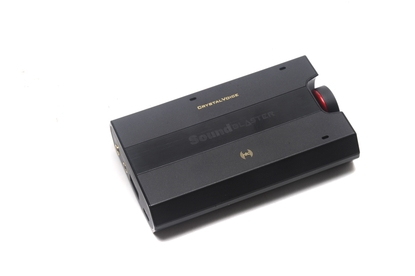 The Sound Blaster E5 can be used as a portable, external amplifier for a smartphone or tablet, or as a sound card for a notebook or desktop PC. It’s primarily aimed at those of you who want to get a little more audio oomph out of your mobile devices and computers, especially if you have a high-end pair of headphones attached.

As a portable amplifier, the Sound Blaster E5 has an internal lithium-polymer battery of 3200 milliamp-hours, which is used to power the device, and it can also be used to charge any Android phone that’s plugged in to its USB host port. Connections to the amplifier can be made through the 3.5mm line-in port, but the neat thing about the E5 is that it also supports Bluetooth 4.1 and NFC, which means you don’t have to be wired up to your phone.

We had no problems pairing our Samsung Galaxy S5 by simply tapping it onto the Sound Blaster once NFC and Bluetooth were enabled on the phone. It makes use of the aptX low latency audio codec for streaming, and for us the connection was solid, and the music sounded clear and well rounded. For lossless audio, Android and iOS phones can be connected to the amp via its USB 2.0 host port (which requires Creative's Sound Blaster Central app to be installed on the device).

Specifications of the Sound Blaster E5 include support for music up to 24-bits and 192kHz in resolution, and a signal-to-noise ratio of 120dB. Two headphone jacks are located on the end of the E5, and these can be used to share the same audio across to sets of headphones. It’s an amplifier that’s designed for good sets of headphones, and it even supports studio quality models that have high impedance (up to 600-ohm for professional gear). A switch on the amplifier can be flicked from low gain to high gain in order to facilitate listening through such headphones.

We tested primarily with a set of 18-ohm Sennheiser Momentum On-Ear headphones, which are our standard choice for the Samsung Galaxy S5 smartphone that plays our music. The main difference we can identify between listening through these headphones directly attached to the phone and through the Creative amp is that the amp supplies a much stronger sound.

This is the main benefit we derived from this external amplifier. We were able to jack up the volume past the level that the Samsung Galaxy S5 offers, which allowed us to really get the speakers in the headphones moving viciously. Most music that we played with the amp sounded invigorating due to the extra jolt of volume, and that’s what we were looking for when we requested this amp in for review. Listening to music on the phone without the amp, we felt like the music struggled to come to life.

When we plugged the sound card into a laptop and compared its sound to the laptop's standard Realtek High Definition chip, the difference in sound quality was even more noticeable. Instances of subtle bass in the 96kHz version of Tori Amos’ Trouble's Lament (which is part of the sampler of high-resolution music offered by HDTracks) were washed out due to noise that could be heard through our headphones in the background. The same was present in the classical piece Concerto No. 1 in E major, Op. 8, RV 269, "La primavera" (Spring), with noise affecting the quieter aspects of the music. When we plugged the Sound Blaster E5 into the laptop’s USB port, that same noise was absent.

For a computer that has a basic sound chip such as the Realtek, Creative's Sound Blaster E5 can really add a noticeable kick in volume, in addition to cleaning up the sound. The beauty of it is that you can plug it in whenever you like and share it between your portable devices and computers. You just have to make sure the drivers are installed for it on your computers (Windows and Mac are supported).

There is a stand that the sound card can slot into when it’s used on a desktop, with rubber bands that can be wrapped around it to stop it from sliding out, and that stand even has a mount for a microphone stand in its base. Two built-in microphones do a great job of recording voice, and we feel like it could be used effectively for things like podcasts, in addition to conversing over Skype and for phone calls. It was sensitive enough to pick up whispers from a regular sitting position.

Other benefits of the amp are its ability to add its own digital signal processing to your audio, which mainly comes in handy for watching movies and playing games. That said, when we enabled the SBX enhancement for music, it added a depth and width that completely changed the dynamic of the sound, making it interesting in its own right. We checked this out purely for the novelty, and preferred the untouched sound best.

In terms of physical design, the Sound Blaster E5 has a metal case with a sturdy build. We like the large volume knob that’s present on the end, and the layout of the all ports can make for neat installation. Headphone ports are one end, while line in and output ports (inclusive of optical support) are on the other. Micro-USB is used to charge the battery, which has a stated playback life of eight hours, though this will vary depending on how you use it. There is a battery indicator on the side that you should refer to.

All up, we like this portable amplifier a lot. It provides a boost in volume, sound quality is lively and engaging, and it can supply clearer sound for a laptop that relies on a standard Realtek chip. Its price of $300 puts it a little out of reach of the more casual listener and pushes it into enthusiast territory, but we feel like it’s a worthy amp for anyone who currently uses a high-quality pair of cans with their mobile device, laptop or desktop.