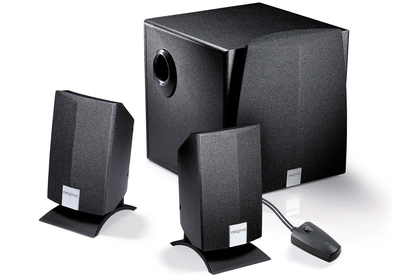 A highly recommended speaker system for those on a limited budget who also want clarity from their PC audio.

Sleek, sexy and deceptively powerful, the Creative 2500 2.1 speaker system surprised us by its superior performance in all our tests. Completely black and uniform in design, the subwoofer thumps out 17 watts of bass and houses all the input and output connections. The satellite volume is controlled by a breakout in-line remote control while the bass level is controlled via a knob on the back of the subwoofer.

When testing bass we gave the six watt satellite speakers a thorough workout with everything from thumping R&B to a drum-heavy film score. We also used the system with the PC game F.E.A.R. (renowned for its audio quality) and were impressed by the resulting sound clarity. While there were a few instances where the bass got a little muddy, for the most part the subwoofer reproduced the bass with reasonable accuracy.

When testing the treble registers we opted to use higher pitched violin-heavy film score as well as Theremin-heavy score from "Ed Wood". In all our treble tests, the system performed remarkably well. Even when we threw constant pitch changes at the Inspire 2500, it adapted faultlessly, with no marked change in clarity or loss of information. The mid-tones survived our test reasonably well too, with only a few instances of the audio becoming a little flat.

The Inspire 2500 is capable of remarkably high volume with only little distortion at its peak. At those volumes, the subwoofer tended to vibrate and the audio lost much of its lustre but considering the excessive volume of our test in this instance, this is unlikely to be a problem the average user will come across.

The Creative Inspire 2500 2.1 speaker system sets out to achieve affordable good quality sound and should be commended for its success. While this is not the best speaker system we have reviewed, it does deliver a better quality than you would expect for the cost. On a limited budget, this is a system worth getting, providing the you have a reasonable sound card.