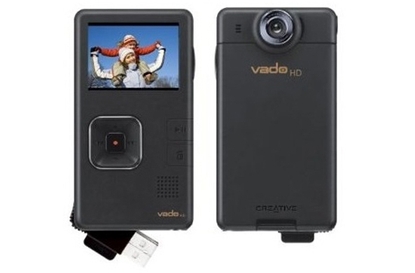 We really liked the Creative Vado HD camcorder’s design, especially the tactile silicon rubber body armour that prevents butterfingers. We were also pleased to find an HDMI output for which the associated cable is supplied, and the option to shoot in standard as well as high definition.

User-friendliness is provided in the shape of an unfussy control layout with large clearly marked buttons, though its slender dimensions mean that there is no optical zoom with the Creative Vado HD, just the ‘cheat' of a 2x digital zoom which crops the image to appear as though you have zoomed. That said, its transition is commendably smooth.

The Creative Vado HD offers a resolution of 1280x720 pixels rather than the more desirable Full HD 1920x1080 pixels, but its 8GB internal storage space allows for up to two hours of footage — more than most of us would want to sit through.

Curiously, while an HDMI cable is included for hooking it up to a latest generation TV set, a regular A/V cable is an optional extra. The Creative Vado HD is powered by a lithium ion battery that slips under the removable front cover and offers two hours of shooting per charge.

Held upright in the palm the Creative Vado HD feels extremely lightweight, with an attractively tactile rubberised surface preventing accidental slippage in lieu of anything resembling a traditional camera grip.

Usefully, the lens at the front of the Creative Vado HD is situated at the very top of the body to prevent fingertips from straying into shot. A USB connection ‘arm' is provided at the base with a rubber tab sticking out via which to extricate it and connect the camera itself to your laptop (a longer extension USB lead is also provided).

Although this is a neat solution, it's a less successful incorporation of a USB lead than the Flip Video MinoHD. Still, it works in the same way: slot the Vado's USB arm into an available port and it appears on your desktop as an external drive.

Although highlight detail tends to burn out, the image provided by the Creative Vado HD's 2in rear compositional screen is sufficiently large for most circumstances. However, we have preferred it to have been a little brighter when shooting interiors.

An onscreen menu lets you switch between HD quality video and standard definition, should storage capacity be an issue. The sound quality of the built-in speaker, although adjustable in volume, is poor. For the more ambitious, you also get a screw thread at the base should you wish to attach a tripod.