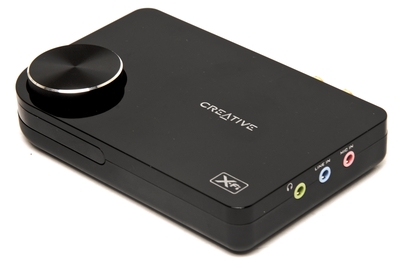 The Sound Blaster X-Fi Surround 5.1 is a portable, well-rounded external sound card with all the advantages of Creative’s internal sound card range. Some won't notice its benefits, but its support for EAX and X-Fi technology will be an advantage for most people.

In an attempt to remedy the poor quality integrated audio in many notebooks, Creative has produced the external USB Sound Blaster X-Fi Surround 5.1. It features a good quality digital to analog converter (DAC) and integrated X-Fi and EAX technology support.

The X-Fi Surround 5.1 is highly portable; it's powered entirely off its host USB connection. A gloss black fascia and blue power LED create a nice aesthetic for the device. It features a large dial on the front for volume adjustment, and the device is appropriately sized given its connection options; it easily fits into a pocket.

Connectivity is quite extensive. The X-Fi Surround 5.1 can output sound to 5.1, 4.1 surround and 2.0/2.1 stereo speaker systems, either through its analog outputs or digital out. This device also has a headphone output, and two line-level inputs for microphone and other recording use. While it is unlikely that any user will make use of all connections, the wide variety of options allows it to suit most setups.

We were disappointed to find no support from Creative for Mac OS X. Our testing shows it will work on a plug-and-play basis on most Macs; using it as an external DAC eradicated the pesky line noise common in the Macbook Pro's integrated audio. However, it has a tendency to crash Mac OS X Leopard.

When used simply as an external DAC, the X-Fi provides a slight increase in audio quality over on-board systems. We tested it out using the Creative I-Trigue 3000i, a computer-based 2.1 system, and the Bowers & Wilkins VM6, a high-end surround sound home theatre system. In both cases, the X-Fi Surround 5.1 provided clearer sound compared to our test notebook's built-in headphone jack. Tonal range was also better, providing a balanced sound across all frequencies (the notebook's output was biased slightly towards mid-range frequencies).

Setup is easily accomplished through plug-and-play drivers, though full use of the device's capabilities requires the user to install additional software. This software allows access to a detailed control panel to adjust settings that relate to EAX, X-Fi Crystallizer and CMSS3D.

For music, EAX — Creative's marketing term for its environmental audio filters — is largely useless, as it simply adds unneeded reverb and distortion effects to the output sound; it is intended for computer games. Given that the Sound Blaster X-Fi Surround 5.1 is designed specifically for notebook audio, the EAX integration may only benefit those with high-end laptops and desktop replacements that are able to play the latest computer games smoothly; its inclusion is still welcome.

X-Fi Crystallizer technology is essentially a dynamic equaliser, designed to improve the sound of compressed audio formats by restoring some of the higher frequencies normally lost in the compression process. In practice, its effectiveness is heavily dependent on the individual user's sound system. Those with properly balanced surround systems, such as the Bowers & Wilkins VM6, will suffer a loss of clarity in music as treble frequencies are given prevalence. However, users with more common audio setups will notice a difference as the Crystallizer compensates for the unbalanced sound offered by computer systems.

CMSS3D is designed specifically for surround sound enhancement; again this is largely useful for computer sound systems. The software allows users to easily adjust the stereo effect between front and rear speakers, enabling them to achieve a balance. Those with 2.1 systems should be warned that this is turned on by default and it may detract from the listening experience if rear speakers aren't being used.