With the addition of the X4 tag, Corel has moved Designer further away from the 2-D technical drawing market towards the 3-D CAD space. 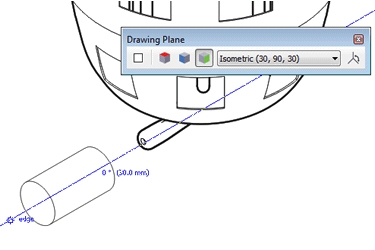 There is a wealth of Windows technical illustration software around the sub-$500 mark, but if you want the bitmap and 3-D functionality offered here too, as well as library of 4000 ready-to-use symbols, this suite probably provides better value in the long run. If you work with 3-D CAD models, you should be aware of the import limitations of Deep Exploration CSE, though.

With the addition of the X4 tag, Corel has moved Designer further away from the 2-D technical drawing market towards the 3-D CAD space. Not that Designer can now create 3-D models, but the addition into this suite of Right Hemisphere’s Deep Exploration 5.5 CSE allows you to convert 3D models into accurate 2-D graphics. This is useful for creatives who often work on technical illustration assignments, diagrams or other complex projects where accuracy is crucial.

The new version has enhanced software support: it can handle files in the latest AutoCAD 2009 format, while Microsoft Visio support has been updated to handle v2007 and v2003 files; there’s also support for PDF 1.7 and PDF/A, Word 2007, Microsoft Publisher and JPEG 2000.

However, the included CSE version of Deep Exploration doesn’t handle some of the major 3-D CAD formats.

If you want to import SolidWorks files or output from Autodesk Inventor, for example, or publish to a 3-D PDF, you’ll have to spend another £1,100 to purchase the upgrade to Deep Exploration 5.5 CCE.

There’s a new Objects Coordinates Docker, which can be used to create and modify shapes and lines with precision. It’s worth noting that once you’ve modified a shape with the Docker’s adjustment sliders, a new object is created in the drawing window and some transformations and effects will be lost. Therefore you’re offered the option on the Docker to either create a new object and begin working with that instead or replace the original object.

You can now control and edit layers independently for each page, adding local guidelines or master guides across the range of the document, which certainly suits a highly technical workflow — particularly architectural and engineering projects. You can set multiple layers from imported CAD documents to display on a single page.

Also good for this market are the X4 enhancements to connector lines, dimension lines and callouts, such as reverse arrowheads and support for monospaced text. Arrowhead attributes such as size, offset and rotation angle can be specified, and there’s a new facility to add halo masks to connector lines, to make diagrams more readable.

It’s tempting to view this suite as a ‘Creative Suite lite’ for technical illustrators. However, while Adobe has been targeting that market with new cutaway and measurement features in the pro versions of Acrobat 9 and Photoshop CS3, Corel’s central component goes a lot further in serving this type of work.