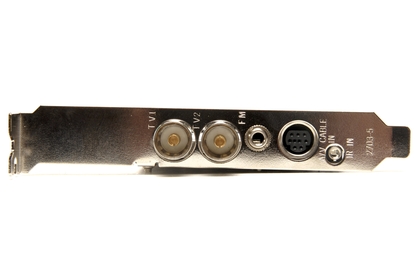 Even though it has two tuners, this card falls short of pleasing because they are not well implemented and the supplied software is frustrating to use.

With the Olympics in full swing, there's no better time to buy a new digital TV tuner card for your PC. Well, a better time may have been before the Olympics started. Nevertheless, there is still a good two weeks of action worth capturing, and with Compro's E900F tuner card you'll even have the ability to record two channels simultaneously.

The card's physical installation is simple: just plug it in to a free PCI Express slot in your motherboard, and follow the instructions in the manual to get the power-up feature to work (if you intend to use it, that is). The power-up feature allows the E900F to boot your PC in order to commence a scheduled recording. A large media centre–style remote is also supplied in the package, and it means you can control this card without using a keyboard. For those of you who have a slimline media centre case, Compro supplies a half-height mounting bracket in the box.

But before you rush out and buy the E900F, you need to know about its quirks. The main one is that you'll need to plug in two antenna cables to use both of its tuners. This means you'll have to get a Y-type adapter or splitter so that you can feed the signal from one antenna to both tuners. You can use the E900F with only one antenna plugged into either one of its tuners, but then you won't be able to watch one channel while recording another, for example. We'd prefer to see Compro employ a design that requires only one antenna cable feeding both tuners, as the current design is cumbersome and unsightly, especially for media centres.

Compro supplies its ComproDTV 4 software, so you can start watching TV straight away. However, you might want to use Windows Media Centre (if you already have it) to control it instead. ComproDTV has many little annoyances that sometimes make it a frustrating experience to use. The first of these annoyances is the aspect ratio. ComproDTV has a habit of stretching the picture to fit the entire screen when it's set to auto-detect the aspect ratio. This means that on a monitor with a 16:10 ratio (such as one with a 1920x1200 resolution) the picture will look less defined than it should. To overcome this, you need to select the 1.85:1 ratio option from the menu, not 'auto'.

With the aspect ratio sorted, you'll need to wrap your head around the software's recording features. Time-shifting isn't enabled by default, but can be easily invoked by pressing the time-shift button on the software's control panel. With time-shifting enabled, you won't be able to record any programs, nor will you be able to change channels.

Recordings can only be initiated when the time-shifting option is disabled, and then you have the option of recording a current channel's MPEG2 stream, or its entire transport stream, which will also record all its sub-channels. Recordings can be paused and resumed, which is handy, but you can't select the quality of the recording. This becomes dire when you use the software's 'straight to DVD' recording feature, which works in conjunction with the bundled Ulead DVD MovieFactory 5 SE software. Our disc-recorded results were plagued by poor frame rates and popping audio.

However, recordings made to the hard drive retained the quality of the original broadcast and looked superb. In fact, they looked better than they did live, as the ComproDTV software suffered from being a little pale. We had to increase the colour saturation slightly in order to get a richer-looking image.

An electronic program guide (EPG) is part of the ComproDTV interface, but it relies on the data that the Australian commercial networks supply, so it only lists the current day's programming (except in the case of Channel Nine, which only showed 'now' and 'next' data for its standard digital channel, and SBS, which had no information at all). You can press a button within the EPG to add your selected program to the recording schedule. Unfortunately, even though the card has two tuners, you can't record two digital programs at overlapping times using the standard method. This could be solved if there was an option in the 'source' drop-down list allowing us to use the second digital tuner or if the ComproDTV software used both tuners transparently.

There is a way to record two programs at once, but it involves using the 'add window' function, which launches another channel window. With this feature you can open a second digital window and navigate to the two channels you wish to record from. Selecting the channel in the new window is a chore in itself, however, as there isn't an option for a channel list like there is with the main window, and you are forced to navigate by the using the 'up' and 'down' channel commands.

After a while you get used to some of these quirks, but it's still disappointing that the ComproDTV software can't use both digital tuners transparently. We think a re-design of ComproDTV might be best in order for Compro to effectively bring out the best of this card's features. The physical design of the card could also be improved so that only one antenna cable is required to run both tuners. Overall, we're a little disappointed by this dual-tuner offering.