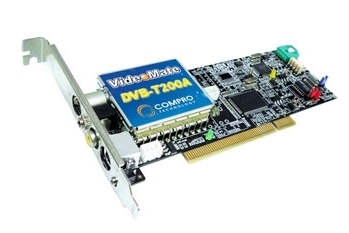 Despite some quirks during timeshifting and the slow channel changing, the DVB-T200A is a versatile card and is well worth considering, especially for a Windows MCE 2005 machine.

Plenty of features and a competitive price tag make the DVB-T200A a worthy choice for any PC that requires digital TV functionality.

The card can also be used to record from composite or S-video sources, which worked well in our tests, and the card's software interface Compro DTV has a button for quick switching between these sources. Compro DTV has a couple of little annoyances, including slow channel changes, disappearing mouse cursors and slow timeshifting.

Manual recording was straightforward and worked well, as did the scheduler. The DVB-T200A is one of the few cards on the market that has the ability to actually power up a computer and then follow a recording schedule. It does this by using a power switch pass-through for ATX power supplies.

For lounging, the card is supplied with an infrared remote control and it also has BDA drivers, which means it can be used with Windows Media Centre Edition (MCE) 2005.