DiRT 2 not only lives up to its spectacular predecessor, but it speeds past it in a blaze of glory 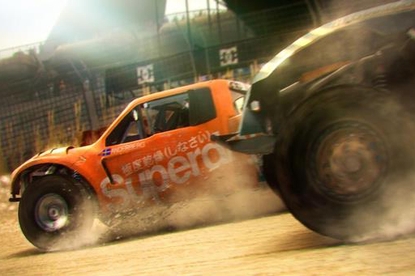 There are so many courses, cars and race types in DiRT 2 that it's almost overwhelming to look at your world map. At one point I had almost 30 unlocked, un-played events just waiting to be tackled. It's a dense game with a lot to do, and you'll want to do it all.

DiRT 2 's slick menus and stylish presentation will wow you when you first boot up the game but you won't see the full breadth of the imaginative personality and original ideas until you hit the track. DiRT 2 's fantastic rally racing is where the brilliant balance of challenge, reward, diversity and progression combine to form a sublime game that leaves the trailing competition covered in sun-caked mud.

A number of things keep DiRT 2 enjoyable throughout the massive world tour career. The rewards that accompany your earned experience points and increasing level of fame act as an incredibly enticing carrot. I was particularly happy that the repetitive recycling of courses was balanced by constant access to new countries, each with its own collection of unique tracks to rip up in big tours, tournaments and other events. I adored slinging sticky mud in the Malaysian jungle not only because it was so gorgeously detailed, but because it felt like a distinct place that was radically different from the dusty Chinese trails.

That diversity is present in vehicles as well. The seven car classes feel different enough from each other that you'll find yourself getting behind certain wheels for specific races. In that regard, DiRT 2 does a wonderful job of encouraging you to own a lot of wheels. Instead of banking on one powerhouse truck, I relied on a Pontiac Solstice to handle off-road rallies and Gate Crasher time trials (an excellent event where you can add extra seconds the countdown clock by smashing yellow gates). Meanwhile, my second Solstice was prone to spinning out on those surfaces and better served as a breakneck-quick circuit racer and ace 1v1 competitor.

Regardless of your preferred wheels, you're going to endure the dangers of winding paths or rocky roads. One of the most creative additions to DiRT 2 is the Flashback ability. Originally appearing in Codemasters's street-racing sim GRID , the time-traveling ability alleviates the frustration of repeatedly crashing, which makes for a more forgiving and enjoyable rally racer. Want to retry the hairpin turn that sent you careening into a Croatian church? Just rewind your instant replay and try it again; just go slower this time, okay?

If you don't want to feel like a sissy, bumping up the difficulty cuts the number of Flashbacks you can use per race while also increasing your cash reward. As that sim-loving crowd creeps closer to realism, super-smart AI opponents like Travis Pastrana and Katie Justice offer a brutal challenge by passively pumping their brakes, cutting you off to jockey the lead and retaliating if you get too aggressive. It's a satisfying challenge, but is strictly for rally racing veterans.