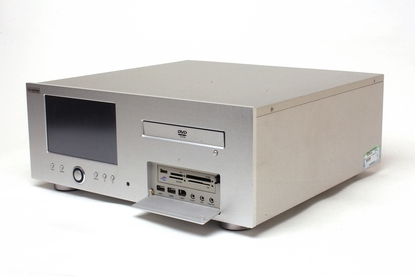 If you're after the latest in pre-assembled media centres then The CTS1000 is probably right up your alley. Be prepared to pay a premium for the extra features though.

The Claritas CTS1000 had a huge presence at the 2005 Home Entertainment Expo. A high end media centre PC that sported a most alluring one terabyte of storage (that's one thousand gigabytes), it was definitely on more than one reviewer's wish list.

The primary purpose of a media centre is to synergise all the major home entertainment devices together into a single unit, and the CTS1000 managed this brilliantly. It offers DVD playback and burning capabilities through the DVD drive, television playback through dual TV tuner cards as well as hard drive storage and the ability to record media quickly and easily. It also comes with a variety of customisable features, including hard drive space and an optional touch screen. Our review unit sported the most expensive possible combination, with a gargantuan terabyte of storage and the seven inch LCD panel on the front. Depending on your preference, the price can drop as much as $1500 from the model we have reviewed here.

To put this in perspective, the average CD is about 70 to 80 megabytes if you encode it as a high quality MP3, and about 350 megabytes if you encode it in a lossless format. An encoded DVD will eat up roughly 800 megabytes, or about four gigabytes uncompressed. So with a terabyte of storage you could store 1000 encoded CDs and 500 encoded DVDs, and still have enough room for games, applications and television recording.

Recording is made easy with the CTS1000, as it comes with a free 12 month subscription to IceTV. IceTV is Australia's only authorised Electronic Program Guide. It functions much like a virtual TV guide, except it allows you to record selected programs without being there, then watch them back later when you have time. Freed from the constraints of mere time, you can watch what you want when you want, be it cartoons at three a.m or game shows in the morning! The fact that this unit has dual tuners means you can even record two things at once, or watch regular television whilst recording another channel.

Whilst dual TV recording will certainly get people excited (go on, admit it!) what we were hoping for when we heard about this terabyte monstrosity was a media centre that could also play games at a reasonable level. For $5500 you can get yourself a seriously powerful machine if you build it yourself. Previous media centres had flopped in the gaming stakes, scoring pitiful 3Dmark scores of 300 or less. Startlingly the CTS1000 didn't fare much better, netting a measly score of 1600 despite having an Athlon64 3500+ processor, a gigabyte of ram and an nVidia 6600 graphics card. These specs should play most modern games, albeit at low settings, but the horrible 3Dmark result indicated otherwise. With a score like that we would expect older games like Quake 3 would run quite well, but anything more modern would seriously struggle.

One other notable hardware feature was the sound card. The 7.1 Mystique is one of the premiere audio cards on the market at the moment, offering full 7.1 support and almost unsurpassed audio quality. It is the perfect choice for outputting surround sound to a home theatre system (via a receiver) and it was a considerable step up from the onboard sound we've seen on some other media centres.

The CTS1000 ran Windows Media Centre Edition as its operating system, which is essentially the same as Windows XP, but with a new media player console that offers intuitive access to all the media on the PC. Windows MCE has a few minor problems with cataloguing files, but whether you are a seasoned computer veteran or a home entertainment newbie, the interface should prove easy to use.

You can interact with this interface through either the Microsoft Media Keyboard which we found to be extremely practical, or a USB remote, which functions exactly like a regular television remote. A lot of people worry about having a computer in the lounge, but apart from booting it up, the CTS1000 can be just another home entertainment device, controlled by a remote if you so choose. It boots up straight into the media console, and you never so much as have to look at the desktop.

Another important part of blending in to a home entertainment scenario is the style of the device. Nobody wants a massive rackmounted PC case sitting next to the svelte 42 inch plasma. Thankfully this unit comes in a horizontal, brushed silver case, with a minimalist button layout and a stylish looking LCD touch screen. The power button glows light blue, lending a suitably futuristic feel, and the whole unit looks brilliant.

The touch screen is something that we originally thought would be a nifty addition, but over time it gradually lost its impact on us. The 7" LCD sits on the front left hand side of the unit. It didn't come automatically configured, and it took us a good ten minutes of plugging in cables and changing settings before we had it running properly (there was no real documentation telling us how to do this). The screen duplicates what is present on the main display, with the goal of allowing you to manipulate music content without actually firing up your television. It sounds pretty neat, but realistically most people would rather switch their TV on and use the remote than have to get up and walk over to touch the screen manually. Thankfully you can get the unit without the screen, saving you an unnecessary cost.

One thing that really annoyed us about the unit was the incredibly slow boot-up time. Claritas have installed a mountain of software on here, everything from virus scanners to the touch screen drivers, but when they all fire up simultaneously, it makes for a long wait.