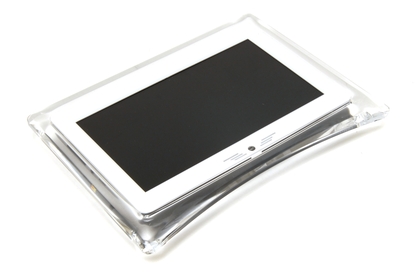 A polar opposite from the other Claire frame we have reviewed, the DF20072 is a poor product that underperformed and underwhelmed.

A smaller version of its bigger brother, the DF20082, the Claire DF20072 is unfortunately a photo frame fraught with all manner of problems. It still uses the terrific feature set and interface of the larger frame but it's like trying to shove a Lamborghini engine into a Datsun Sunny. The image and sound quality are both below standard, and the viewing angles and brightness are both below average.

The interface of this unit is identical to the DF20082. The modes are separated into photos, clock, audio and settings. It has the same 128MB of memory and can easily connect to a PC via the provided USB cable. However, the design of this unit is clearly meant to be the "budget" model. To navigate the menus you need to use the series of buttons on the top of the rear of the unit. This array is fairly inconvenient as you are unable to view what is happening on-screen and look at the buttons at the same time. It relies on you learning the button position and adapting rather than having an intuitive design to begin with.

The most obvious problem with the DF20072 is the image quality. There simply is not enough resolution on the 7in screen to accurately render an image. Photos we viewed looked pixelated, edges jagged, colours incorrect, and the viewing angle was poor. All in all, the image quality was terribly underwhelming and based on this fact alone, we would be hard-pressed to recommend it.

Unfortunately, the sound quality was also lax. MP3 files that we used for testing sounded poor. Specifically, bass was non-existent, treble inaccurate and tinny and midrange muffled. Unfortunately, music playback on the DF20072 sounded like listening to music on a cheap pair of laptop speakers.

From a design perspective, the frame actually takes a bit of time to try something new. It's not too new, because too new would be risky, but its enough to make it stand out from the crowd. It has the same white bezel and clear plastic frame. However, the frame has curved edges and looks far more pleasing to the eye. Unfortunately, the great looks don't make up for the poor performance and the myriad of other problems.