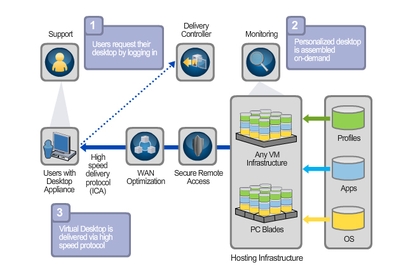 It seems that the whole world has been talking about VDI (Virtual Desktop Infrastructure), with very different views of what VDI actually means. If virtualisation itself is an adolescent, VDI is still an infant, and thus there are still plenty of growing pains to come.

The major issues with VDI at this stage are deployment, management, and allocation of compute and storage resources. These are the same issues that face traditional desktops, but encapsulated within a single infrastructure component, where their effects are magnified.

Desktop workloads are necessarily very different things to different users. Data entry use cases are wildly different than power user or engineering use cases, for instance. When addressing different use cases within the same organisation, it's far simpler to point and click to add resources where needed than it is to buy and install desktop systems for individual users, especially when those users will not require the horsepower afforded them every second of the day.

This is where VDI comes in. At first blush, it seems that all you'd need to have a functioning VDI implementation is a hypervisor, some desktop images, and an RDP (Remote Desktop Protocol) client. At the base level, that's true. However, that ideal quickly fades when the realities of management and resource constraints hit home. This is where Citrix has been focusing its efforts.

Historically, Citrix has been associated with thin client desktop and application delivery, bringing to mind large farms of Windows servers running Citrix MetaFrame and delivering applications and desktop sessions to users via Citrix's ICA protocol. Each server was a member of a farm, but sessions could not migrate from server to server, and resources associated with a specific session were tied to that server for better or for worse.

VDI, on the other hand, is built with a specific desktop VM assigned to each user, not simply one of several dozen terminal services connections to the same server. Coupled with VM migration technologies, VDI prevents heavier users from impacting the rest of the users on a specific server, since their VM can seamlessly move to a less-busy host server.

That's all well and good, but other problems crop up in a VDI environment, such as the cost of storing all those VM images. A 16GB footprint may not seem like much, but that's the absolute minimum for a Windows Vista desktop with Office 2007 installed. If you have a few hundred of those (you'll need one for each concurrent user), suddenly you're talking real storage requirements and real I/O.