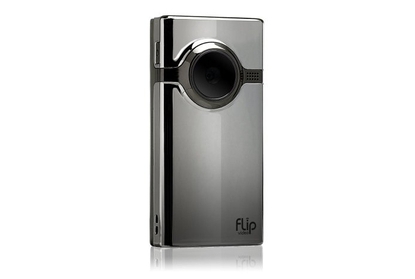 The second-generation Flip MinoHD is the sexiest and most solidly built pocket camcorder we've seen yet, and it backs those refinements up with very good video quality. Highly recommended.

The second-generation Flip Video MinoHD doesn't represent a huge jump in specs and features; notable changes to the previous MinoHD include a doubled storage capacity (from 4GB to 8GB), revamped video software, an HDMI-out port, and the end of the line for the Pure Digital brand (Cisco bought Pure Digital in March, and "Flip Video" is now the brand name).

But the stars of the show are the vastly improved build quality, the best-in-class low-light video, and the sheer aesthetics of the device. Without a doubt, this is the sexiest HD pocket camcorder to date; it'll go well with a tux or cocktail dress. Not only do the brushed-metal faceplate and redesigned USB connector make the new MinoHD look like an Apple product, but also they make the device feel a whole lot sturdier.

Unlike the plasticky, slightly cheap feel of previous Flip camcorders, this one feels like it's built for serious business. It's a bit heavier, too, tipping the scales at 114g while the first generation weighed 93g. The new model's internal 8GB flash drive holds two hours of video, up from the first-gen model's one-hour drive. You also get a bigger LCD screen than on the previous edition: the second-generation MinoHD has a 2-inch-diagonal LCD screen, as compared with the previous model's slightly puny 1.5-inch display.

Video quality has improved a smidgen, as well. Like the first-gen MinoHD, the new model shoots 720p high-definition video at 30 frames per second, saving them as MPEG-4 files with H.264 compression. Footage shot in bright light no longer has the yellowish tint we've seen in video from previous Flip camcorders, nor as much of a blue tint as in the footage we shot with the Flip UltraHD. That said, the new MinoHD still adds a slightly blue cast to its bright-light footage -- just not as much as the UltraHD does.

To test the MinoHD's video performance, we shot a bunch of footage using the Kodak Zi8, Flip MiniHD and Flip UltraHD. The new MinoHD seemed to shoot smoother and sharper video than the Kodak Zi8, but the MinoHD trails noticeably in color accuracy and highlight definition. We also noticed that while colors are vibrant, they tend to bleed a bit in some footage.

Flip camcorders have traditionally smoked their pocket-camcorder competition in taking low-light video, and the new MinoHD ups the ante even further. The footage it takes in low-light conditions is at the head of the pocket-camcorder class, rivaling and even surpassing the low-light video of full HD camcorders that cost five times as much. Compared with the video we got from our former pocketable low-light champion, the Flip UltraHD, the improvements are stunning. And compared with results from the Kodak Zi8, the MinoHD's colors are vastly more accurate and its shadowy areas are far more clearly defined.

Like previous editions, the new Flip MinoHD has a flip-out USB 2.0 connector, which pops up switchblade-style from the top of the device. It also sounds more like a switchblade in this version, due to the fact that the refined connector is now entirely metal. That's a significant upgrade from the plastic-hinged connector on previous models, especially since it's such an important part of the device: The USB connection handles both battery charging and offloading clips to your computer, and the plastic connectors on previous models felt like they could snap off easily.

The new connector is an aesthetic upgrade, as well. When you press the switch on the side of the MinoHD to flip it out, it's pleasantly minimalistic. When it's closed, it stays flush with the top of the device, adding to the MinoHD's slick looks. It's one of two connectors on the device; the new MinoHD has an mini-HDMI port on the bottom of the unit for watching videos on an HDTV set, which is another addition over the previous MinoHD. (You get no HDMI cable in the package, however.)

The basic controls are identical to those of the older Flip MinoHD. The big red button below the LCD screen starts and stops recording. Touch-sensitive controls flanking the button let you manage the zoom and scroll through videos during playback. Directly below the LCD screen are two touch-sensitive divots to control playback and delete videos. While the operation and layout are the same as on the first-generation MinoHD, the responsiveness of the controls seems a bit better. The new MinoHD also has a very smooth 2X digital zoom; the zoom is the best we've seen on a pocket camcorder, but that's not saying much.

The revamped FlipShare software, which installs and launches as soon as you plug the camcorder into your Windows or Mac OS X computer, has a couple of new tricks of its own. In addition to YouTube and MySpace integration, the new FlipShare software now supports direct-to-Facebook uploads. It also offers a feature called MagicMovie, which stitches together samples from your video clips, inserts basic transitions, and lets you add title sequences and music to your movies. They're welcome additions for anyone who plans to use the FlipShare software for managing and editing clips. For owners who don't, the Flip also supports dragging-and-dropping clips from the camcorder to your hard drive.

The sum of all these parts is arguably the best HD pocket camcorder out there. Kodak's 1080p-shooting, digitally stabilised Zi8 is still a notch above the new Flip in bright-light video quality, frame-rate controls, and overall features, but it has some nagging usability issues that keep it from being the outright pocket-camcorder champ. The second-generation Flip MinoHD beats it in low-light footage, usability, durability, and design. Those people heralding the Apple iPod Nano as a "Flip killer" had it dead wrong: With this iteration of the MinoHD, Flip Video has created the iPod of camcorders.