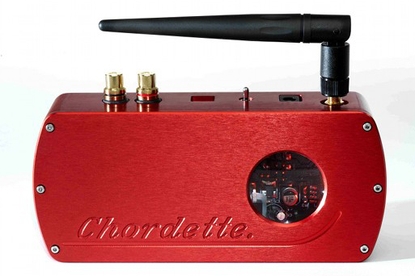 At around £400, this is not a cheap solution to hearing music from your mobile phone or PC. But aside from a second string to its bow — USB audio playback — it stands as only the world’s second such product that can retrieve music wirelessly from your A2DP Bluetooth-equipped mobile phone. The first is the company’s own QBD 76 DAC, at nearly eight times the price.

It can accept digital audio either through Bluetooth, using the advanced audio distribution profile (A2DP), or via USB.

Once paired with a mobile phone, Mac or PC, any MP3 or similar music files can be beamed through the aether and received via the Chordette Gem's folding rubber antenna. We found the Chordette Gem's range to extend up to around 8 metres before drop-outs became audible, so should work well in most people's living rooms.

The Chordette Gem unit is milled from high-quality aluminium in a choice of six colourful anodised finishes, and features the company's trademark 'porthole' window on top, allowing you to see the LED-illuminated electronics within.

In listening tests, we found sound quality was good, if limited somewhat by the inevitable on-the-fly lossy compression applied to the audio signal before it's transmitted to the Chordette Gem. Beware, therefore, that even pristine WAV or lossless files will carry some hint of 'MP3ness' to them. As the A2DP protocol evolves, expect to see this improve as better codecs come into use by hardware manufacturers.

Meanwhile, the USB input option has no such limitations, and gave us one of the best quality USB audio playbacks we've encountered. Digital 'glare' was notably absent, with a smooth, analogue-like richness to the sound that nevertheless replayed detail aplenty.

You will need to set level carefully when playing back from both Mac OS X and Windows, adjusting volume level to around 50 per cent to avoid digital clipping, which is heard as unpleasant overload distortion.

When set up correctly, the Chordette Gem defies its diminutive size by conjuring up a big, warm sound that will get the best from digital audio from your PC.