The Resident Evil franchise has come a long way from its gore-filled beginnings on the original Playstation. 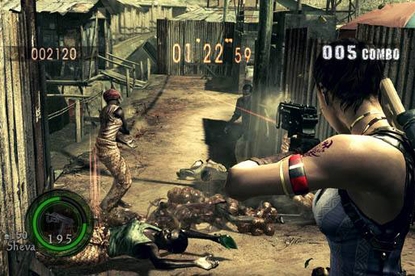 Capcom is on quite a roll these days. From their sublime Mega Man 9 and Street Fighter II reboots to the fantastic Street Figher IV, Capcom is the video game equivalent of the goose that lays golden eggs. And now, they've created what might be their best effort to date: the incredible Resident Evil 5. Building upon the rock solid foundation laid by Resident Evil 4, RE5 delivers a pulse-pounding experience that can't be missed. Gamepro features editor Patrick Shaw, who just happens to be our resident horror fiend, doesn't think it delivers the scares of past RE titles but it has more than enough action to keep you on the edge of your seats.

The Resident Evil franchise has come a long way from its gore-filled beginnings on the original Playstation. Resident Evil 4 took things into a new, action filled direction and its sequel, the sublime Resident Evil 5 is here and it's packing enough guns, guts and glory to satisfy any gamer with an appetite for destruction. So read on for our review of the next thrilling chapter in the Resident Evil saga!

Editor's note: Patrick Shaw took a long hard look at both the PS3 and Xbox 360 versions of the game and found no discernible differences in terms of gameplay.

I don't think I'm alone when I say that the release of a new Resident Evil game can make it feel like it's Christmas morning, one filled with beheading undead monsters with headshots, but Christmas morning nonetheless. Since the survival-horror series' inception in 1996, there have only been a handful of official sequels, so Resident Evil 5 is a big deal for fans of the franchise.

But the game has some massive shoes to fill — I'm talking Shaquille O'Neal sized sneakers. After all, its predecessor, Resident Evil 4, is regarded as one of the best horror-themed video games ever made. The good news is that Capcom is not resting on their laurels with this latest installment; Resident Evil 5 introduces a ton of new features and improvements that make it worthy of following in the footsteps of the classic fourth installment. It's a fantastic game from beginning to end and its new cooperative campaign makes it as compelling as Gears of War 2.

Resident Evil 4 took a risk by replacing its trademark slow-moving, inarticulate zombie cliches with an entirely new breed of enemy, the parasite-carrying cultists called Las Plagas. But this change for the series ultimately breathed new life into the Resident Evil formula as it pitted players against creatures infinitely more horrifying than mobs of stumbling, brain-dead zombies. Resident Evil 5 takes this reinvention of the franchise even further, putting an emphasis on action over suspense and adding a much-needed cooperative campaign.

Resident Evil 5 actually isn't the first RE game to feature multiplayer support. In the spin-off series Resident Evil: Outbreak, several players could play together online butchering zombies. Alas, the team behind those games didn't quite get the balance right and the games suffered from bland gameplay and an overall underwhelming experience. Fortunately, Capcom has ironed out the kinks and Resident Evil 5's co-op is a welcomed addition to the series. It doesn't matter if you're playing the game with an A.I. ally or your buddy over XBL or PSN — RE5 just feels right as a co-op game.

Another big shift in focus for the series is its emphasis on action-oriented gameplay. While there are more than a few pitch-black hallways crawling with undead abominations in Resident Evil 5, the bulk of the campaign is made up of huge action sequences that favor explosions, vehicle chases, and encounters with massive flocks of enemies that require you to burn through a lot of ammunition. It's pretty evident that recent action titles like Metal Gear Solid 4 and Gears of War 2 have influenced this new direction for the survival-horror series. There's even a level towards the end of the game that's strikingly similar to a rather important level in MGS4.

With the growing popularity of games like Left 4 Dead and Gears of War 2, there's no question that providing players with a copious amount of action is essential when delivering a co-op experience, but as a result, much of the suspense in Resident Evil 5 has been marginalized in the process. The truth is that the game doesn't have the same foreboding atmosphere as Resident Evil 4; the game's design also purposefully strays away from the 'haunted mansion' setting of past titles, using instead sun-filled outdoor levels. That said, I suspect most players will embrace this new direction for the series, which does not completely turn its back on its horror roots.

The Undead Get Upgraded

As we saw a palpable evolution in Resident Evil's cast of enemies in the fourth game, Resident Evil 5 continues this trend. The enemies in the game are not unlike those of the previous game — they too have a plague that can cause disgusting parasitic growths to burst forth from their flesh and whip you in the face. But the zombie-like foes in Resident Evil 5 are far more advanced than seen in previous games. This evolution can be witnessed early on in the game as their motor skills are developed to the point that they can ride around on dirt bikes.

The most shocking change made to your infected enemies occurs in the second half of the game, and it's something that has a particularly big impact on gameplay. Fully clad in military fatigues, your undead foes begin to carry assault rifles and other firearms, completely transforming the combat in the game from that point on. You no longer have time to carefully aim those headshots and are forced to engage in shootouts with your gun-wielding enemies, taking cover as much as possible a la Gears of War. This is a drastic change for the Resident Evil series and it's one that I have mixed feelings about. On the one hand, I like the fact that things were changed up quite a bit, but Resident Evil 5 more or less dumps the ominous tone and atmosphere the series is known for. The game lacks what made Resident Evil 4 so damn scary.

Afraid of the Dark

But don't get me wrong — the moments in Resident Evil 5 I enjoyed the most are these explosive Hollywood movie-esque scenarios. In one particularly memorable level, you jump onto the back of a truck and pump lead into swarms of infected enemies who chase you on dirt bikes and trucks. In another amazing sequence, you get to steer a fan boat around a murky swamp, avoiding the hungry mouths of mammoth-sized crocodiles. The action is also broken up nicely by Resident Evil's trademark puzzles; the many boss battles that are sprinkled throughout the game also offer a nice touch of variety. The game also keeps things fresh by introducing new enemy types periodically; you can't help but remember the first time you go up against a burly mini-gun lugging soldier or contend with a sack-headed cyclops wielding a chainsaw.

Something that did bother me while playing through the game's campaign is the noticeable drop in energy when you get about halfway through the game. Just about everything you've seen in screenshots and videos from Resident Evil 5 that takes place in the sun-scorched African villages and the alligator-infested swamps are by far the most exciting and interesting moments in the game. Some of the later missions, however, come off as a bit generic and aren't as fun to play as ones experienced early on.

But after beating the game, I have no choice but to award the game a high score. Resident Evil 5 takes players in a refreshing all-new direction. It takes some risks and tries some new things. Hardcore fans may be disappointed by the departure from the traditional survival horror roots but trust me, the game delivers enough thrills that you won't notice.