A wonderful throwback to the glory days of the NES. 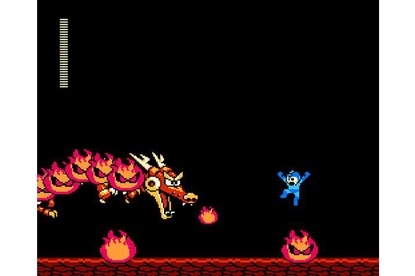 Yes, Capcom did a masterful job of recapturing the old school vibe — you'll swear you were back in 1987 when you play this game-but it's so freaking difficult that it's downright discouraging. Still, with its low price and faithfulness to the franchise's roots, it's definitely worth the download.

I'd forgotten how brutally tough old school games could be but Mega Man 9, the new yet decidedly retro game from Capcom, quickly set me straight. A wonderful throwback to the glory days of the NES, Mega Man 9 looks, sounds and plays like the classic Mega Man games of old. But that's definitely a mixed blessing because it's also freaking hard.

I'll warn you again: navigating the devious trap-filled levels and killing off the cleverly designed bosses in Mega Man 9 requires some serious skill; it almost feels like the developers were purposefully trying to make the game unbeatable. Several GamePro editors sat down one day, intent on beating the game; hours later, we walked away without having even beaten one stage. Even reaching the boss fights on certain stages require ridiculous feats of gaming prowess. I finally found one stage where I could consistently reach the end-Splash Woman's underwater fortress of doom-but the slippery mermaid robot proved too hard for my pathetic gaming skills. It wasn't until the game glitched (or did it find compassion for our plight?) and gave Features Editor Dave Rudden every single power-up that we were finally able to bring her down.

Hardcore gamers will no doubt want to take on Mega Man 9 just for bragging rights-good luck getting the achievements though: some of them just plain ridiculous-but what about the average gamer who's just looking to recapture some old school NES magic without getting their robotic asses handed to them over and over again? For these poor gamers, Mega Man 9 might be more trouble than it's worth.

I'm still going to recommend you check out the title, though, because it shows that Capcom cares about its loyal fanbase and because it's such a well executed throwback to the series' roots. Besides which, it's DLC so it isn't like you're going to break the bank on it. However, with that said, I'm going to give you fair warning now that your gaming mettle will be tested and that, more likely than not, you will probably fail, over and over again.