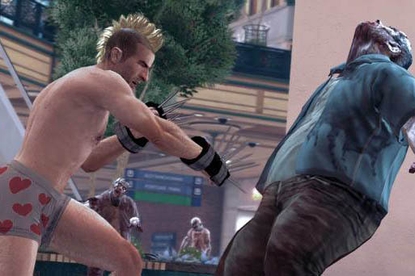 Dead Rising 2 is filled with quirks and lingering flaws, but they're easily shrugged off when delivering the business end of an Electric Rake -- that'd be a car battery and rake joined with duct tape -- to an unsuspecting zombie.

The original Dead Rising may have borrowed its core concept from horror classic Dawn of the Dead, but the level of absurdity in that game was completely unlike anything that preceded it. Sure, it can be played on the straight and narrow, with a variety of traditional firearms and blades scattered throughout the suburban mall, but who didn't swap his or her pistol or knife for a soccer ball, cactus, or stuffed teddy bear whenever possible? The process of killing zombies in increasingly bizarre manners felt more important than the end result, and Dead Rising was all the better for it.

Luckily, Dead Rising 2 doesn't muck up the formula with wild gameplay shifts or scenario changes. It maintains nearly everything that made Dead Rising such a weird concoction, warts and all, but improves aspects that frustrated many gamers, while lightly expanding what made it such a fresh and exciting experience.

Dead Rising 2 swaps in a new setting and cavalcade of personalities, but despite the fresh faces, the experience remains remarkably familiar throughout. Fortune City -- a fictional, sprawling Las Vegas-style casino complex -- may be defined primarily through its slot machines and risque content, but like any worthwhile Vegas destination, its casino floors are bookended by malls and standalone shops, and you'll spend at least as much time looting stores as you will vaulting over roulette tables.

New lead Chuck Greene may lack the aggressive obnoxiousness of photojournalist Frank West (and is arguably a less endearing character because of it), but ultimately, his plight to save his infected daughter and clear his name after being framed for a zombie outbreak feels secondary to the immense joy of slaying the undead in all sorts of devious ways.

Living out your Shaun of the Dead fantasies by chucking records at zombies feels downright pedestrian in a game that lets you mow down foes while riding a pink tricycle, thwart on-comers with a phallic-shaped "massager," and trample enemies by the truckload while rolling through tunnels in a large metal ball straight out of American Gladiators. The collection of curious items is wider and more diverse the second time around, and even after playing through the original and the Xbox 360-exclusive prequel, Dead Rising 2: Case Zero, it's amazing how much fun it is to stumble on some random, otherwise mundane item and use it to bash the nearest shambling foe.

But as Case Zero demonstrated, Dead Rising 2 is no longer just about finding intense and incongruous ways to slay zombies -- it's also about inventing new contraptions to ratchet up both the bloodshed and hilarity. Specific items in the game can be combined with others, with dozens of available pairings that spawn shockingly creative death devices.

The Spiked Bat (baseball bat + nails) and Drill Bucket (power drill + bucket) initially entertain, but are quickly surpassed by much more ridiculous concoctions like the Heliblade -- a toy helicopter with machete blades -- and Roaring Thunder, which requires a car battery and Blanka mask; this combination is not only deadly, it simultaneously offers up one hell of an inside joke. Finding the items and discovering the combinations adds a completely new and totally optional layer of depth to the experience, and is sure to keep players entertained well past a standard campaign playthrough.

It's easy to lose track of time parading through the malls and casinos, racking up kills while experimenting with a wide array of found items, but don't fret: it's much harder to screw up your campaign progress by skipping out on essential missions. While the campaign maintains the structured, watch-the-clock approach of the first, the addition of three separate save slots means you can more easily roll back to an earlier point in the game if you miss a crucial mission cue.

Dead Rising 2's campaign stretches on in excess of 15 hours for each playthrough, but it's nearly impossible to fit in every side mission during a single run, meaning a second and maybe third shot should be considered to soak in every last bit of Fortune City. Both the core missions and optional quests -- which typically involve escorting survivors (who can actually fend for themselves this time around) to the safe house or battling psychotic bosses -- can feel like chores at times, and the plot twists are unlikely to throw anyone for a loop, but even with some still-clunky gameplay elements, Dead Rising 2 remains entertaining throughout.

And it's well worth sticking to the program and knocking out side missions, as levelling up endows Chuck with new moves and recipes for weapon combinations, thus enriching the rest of your zombie-killing escapades. A second online player can jump into your campaign as a co-op buddy, and while the influence of a second player doesn't significantly alter the experience, it's certainly amusing to traipse around the complex with a pal. Plus, the online mini-games based on the fictional Terror is Reality game show -- seemingly a throwaway, bullet-point-on-the-box kind of feature -- are actually very entertaining, and can earn you a lot of in-game cash for use in the campaign.

Dead Rising 2 is filled with quirks and lingering flaws, but they're easily shrugged off when delivering the business end of an Electric Rake -- that'd be a car battery and rake joined with duct tape -- to an unsuspecting zombie, as the pure joy of creation and destruction alike come together to create an enthralling action experience that's still unlike anything else out there.