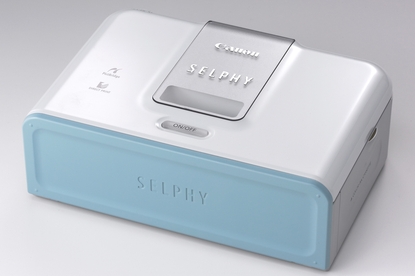 Though not a looker, lacking in versatility and slightly short on image quality, the Selphy CP510 is still worthy of your attention. That reasonable price and those brilliant running costs make this a good, cheap model.

Like Canon's Selphy CP400 the new CP510, lacks an LCD screen, any onboard options or storage card slots But the CP510 faces a lot more competition and, despite being cheaper than its predecessor, it doesn't stand out.

That said, it's blazingly fast and supremely economical. It's just a shame the image quality is only so-so.

What you get for your money is a boxy 300dpi thermal dye printer that's not much to look at. The ink ribbon is loaded on the left hand side and you get five sheets of paper to start with. The right hand side sports connectivity for PictBridge so you can hook up compatible imaging products and, if you want to be a Luddite, there's also a USB port, as well as a retractable mini-USB cable that can be attached to compatible cameras.

As with most thermal dye sub-printers, the photo paper has to pass several times and normally comes halfway out of the back of the printer, so the Selphy can't sit flush against the wall. Top marks for having an optional battery pack for mobility.

Canon claims print speeds of 58 seconds per print, which we matched - but these speeds are only possible if you're using a Canon camera with the Digic ll processor. We were using the Canon Ixus 750. That said, it's only a few seconds slower with other setups.

We took some shots on the Ixus 750 at a resolution of 3,072 x 2,304 and credit to Canon for the great colour matching. But the prints were immersed in a very light fog that spoiled some of the captured detail.