Despite its relatively small size, the Canon PowerShot SX120 IS digital cameras includes a 10x zoom lens and is the perfect choice for anyone who seeking a versatile camera to encompass a variety situations — such as a sight-seeing trip or a friend's party. Its picture quality is very good overall, but it does suffer from some fringing issues.

Canon’s PowerShot SX120 IS is a marvel for anyone who wants a small camera with a big lens, as well as excellent low-light shooting capabilities. It’s perfect for almost any photo situation, including concerts and parties; and when you take into account its $399 price tag, it’s a very good purchase.

There are some minor issues with its image quality, but they will hardly be noticed unless you plan on viewing your photos at the full resolution, or printing them at a very large size.

The body of the camera is comfortable to hold and with dimensions of 10.7cm wide, 4.4cm thick and 7cm high it is small enough to be popped into your pocket when you don’t want to carry a camera bag. It has well laid out controls, but these controls feel a little cheap when in operation. The mode dial is the main culprit as in our tests it jolted into position, rather switching smoothly when you turn it. The zoom is another culprit — it made an awful buzzing sound, and is sluggish and jumpy. The 3in LCD monitor can also be very difficult to view outdoors with it’s reflective surface; and there’s no optical viewfinder on a camera this small, so this might pose problems when using the camera on bright days.

You don’t get an automatic flash with the Canon PowerShot SX120 IS either — its flash has to be lifted and dropped manually. The number of control buttons on the rear of the camera is minimal, making the PowerShot SX120 IS digital camera very easy to use. You can either choose from one of its semi-automatic modes (aperture priority and shutter priority), fully automatic mode, scene mode (there are eight modes), or you can park it manual mode to take complete control of the settings.

Manual mode gives you direct control over the aperture, shutter and ISO speed of the camera, and these values can be changed by rotating the dial that sits on the five-way thumb control. There is a dedicated shortcut button for accessing the ISO speed, and you can press the +/- button to change between the aperture and shutter speed. We recommend using this digital camera manual mode, as the semi-automatic and automatic modes sometimes over-exposed our images.

The widest aperture of the lens is f/2.8. When combined with an ISO speed of 400 or 800, a slow shutter speed, and built-in lens-based optical image stabilisation, it gives the camera great performance when shooting indoors or at night. 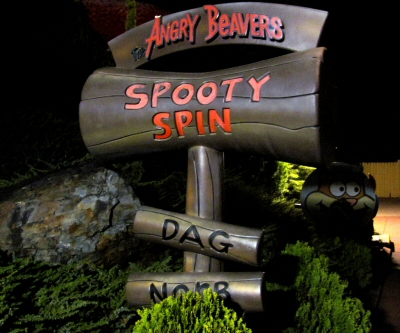 Excellent low light performance: this image was shot with an aperture of f/2.8, an ISO of 400 and a shutter speed of 1/5sec without the use of a tripod. You can see that it is quite clear and that image noise is not an issue. We adjusted the levels slightly to give the image more contrast, and also cropped it to remove unwanted space at the edges.

The lens has a 10x optical zoom that gives the PowerShot SX120 IS a zoom range from 36-360mm (35mm equivalent) so it doesn’t possess an overly wide angle (not as wide as the more expensive Panasonic LUMIX DMC ZR1, for example). At the maximum zoom, the image stabilisation works well to minimise camera shake and as long as there is enough light and a fast enough shutter speed, your subject will be captured sharply.

Bring your subject closer: the first image is captured at the wide setting of 36mm, while the second image is zoomed in all the way at 360mm.

The lens' maximum aperture is f/8.0 and coupled with a maximum shutter speed of 1/2500sec, very bright scenes might be hard to expose correctly. The lens itself is of very good quality and can capture very crisp images. However, chromatic aberration is very noticeable along edges and in high contrast areas. This manifests as purple or green fringing. You will also notice some lens distortion along vertical lines. 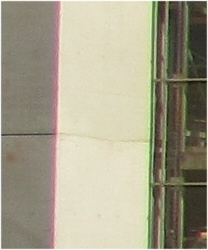 Fringing: you can clearly see purple fringing along edge of the building, and green fringing between the light and dark area.

Focusing performance was accurate during our tests, and you have the option of using a central focus point, or face recognition. The camera can also continuously auto focus as you frame your object in the 3in screen, without you having to first press the shutter button halfway.

Behind the lens sits a 10-megapixel sensor and the camera runs Canon’s DiGIC4 image processor, which is also used in Canon’s high-end cameras (such as the EOS 5D Mark II digital SLR). Colours are not overly rich and images look clear and well detailed, as long as you don’t scrutinise them at their full 10-megapixel size, in which case they will look quite blotchy. At an ISO speed of 800 or above, there will be noise present and black will have speckles of purple in some areas. But overall, the image quality of this camera is very good. It's suitable not only for uploading images to social networking sites, but also for printing at relatively large sizes.

You can also take video with the Canon PowerShot SX120 IS, but note it’s not high-definition digital video. It's quality is acceptable — even if you want to shoot footage of a band at a gig — but it performs best when the lens is zoomed out.

This video was captured (albeit poorly) at the iTunes store in Sydney for the Aussie Legends series of concerts. The video is of the band the Hoodoo Gurus.

Overall, we think the Canon PowerShot SX120 IS is a very good value camera for anyone who wants something small and compact, yet a camera capable of taking good shots in most scenarios. It provides good range with its 10x optical zoom, and it’s also performed well in night settings. We found a couple of issues with its build quality, but nontheless it has a reasonable price tag, it is easy to use and will suit anyone from an inexperienced user to a traveller who wants versatility in a small package.