Big zoom and advanced features on this 9-megapixel camera. 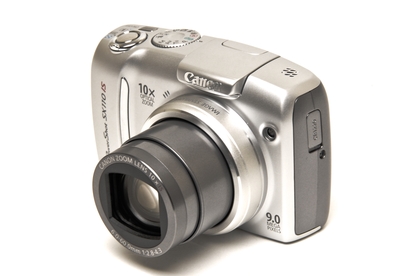 A fairly good big zoom advanced camera, the Canon PowerShot SX110 IS has a few image quality issues but its 10x zoom lens, 3in screen and manual controls make it an appealing all-purpose unit.

Following in the footsteps of the last PowerShot SX model, the PowerShot SX100, the new Canon PowerShot SX110 IS offers a good combination of a big zoom, manual features and solid image quality. Its 10x optical zoom is fairly hefty considering the unit’s size, and more advanced users will appreciate the manual shooting modes. It has a few minor image quality issues but overall the SX110 IS is a strong performer.

Offering the full suite of manual shooting modes including shutter, aperture and program priority modes the SX110 is a bit more of an all-purpose shooter than the units in Canon’s IXUS range. It isn’t as robust as a fully advanced model but it certainly helps bridge the gap for users who want to try their hand at something more creative.

Image quality was pretty good but not quite as impressive as some other Canon units. The sensor is a healthy 9 megapixels, which is fine for most print sizes. Pictures were generally crisp and sharp, with clean edges but there was some noticeable over-sharpening. We’re not sure what is with the recent trend of sharpening pictures to excess, but it does detract a little from the overall quality.

There was also a decent amount of chromatic aberration. We noticed some fairly nasty haloing outdoors along high-contrast edges, even on some bright white shirts, but our indoor contrast charts were relatively well rendered. There was also some moderate blurring towards the corners of the frame.

Noise performance was mixed. On one hand everything up to ISO 400 produces pretty good shots that will be fine for most uses and even ISO 800 might be okay for small prints. However, everything right down to ISO 80 is a little grainier than it should be. You won’t notice unless the shots are magnified quite a bit but it is definitely there.

Colour balance was pretty standard for a Canon compact, with somewhat oversaturated hues that produce pleasing prints. Reds, blues and greens were all noticeably bright and vibrant but as usual you can tweak this using the variety of colour modes onboard, such as vibrant, standard and neutral.

In our speed tests the SX110 IS performed adequately. It started up in 2.6 seconds which isn’t particularly quick but is understandable considering the large lens. Shutter lag was fine at 0.09 seconds and the time between shots was two seconds. For more fast-paced photography, the 2.3 frame per second burst mode should suffice.

The interface will be familiar to anyone who has used a recent Canon camera. All the usual features are there including face detection, custom white balance and a variety of metering and focus modes. We’d have liked to see a few more focus modes, some kind of multi-point mode for example, to add to the appeal for more photo savvy users but you can’t have everything. The 10x zoom lens is supported by optical image stabilisation and as always it does a solid job of minimising hand shake, which is critical with a lens this size.

Aesthetically the SX110 IS is pretty similar to its predecessor. It has a chunky build that is rounded at the top. It certainly won’t be winning any beauty pageants, but it is comfortable to grip and feels sturdy enough considering it is basically all plastic. The 3in LCD display definitely contributes to the size, but many users will find the extra detail extremely useful in framing shots.