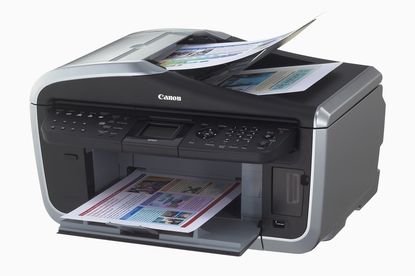 The MP830 has a strong combination of features and terrific performance, making it a worthy option for small businesses, despite its bulky size

As its name might suggest, the Pixma MP830 sits between the MP500 and the MP950 in Canon's Pixma multifunction printer product line. However, the MP830, geared more toward small-business use, provides two key features not found on the other two models: faxing capabilities and an automatic document feeder (ADF).

The ADF makes scanning, copying, or faxing documents (up to 35 pages) easy, and its duplexing ability means you won't have to flip two-sided sheets over manually. In conjunction with the front-loading 150-sheet cassette (on the unit's underside) and the rear 150-sheet automatic sheet feeder, the ADF also allows for high-capacity two-sided copying. For color faxing, the machine includes 36.6-kbps support plus memory for 250 incoming pages and 100 custom speed-dial numbers.

The MP830 uses a USB 2.0 interface. Despite its office-centric features, it doesn't include ethernet or Wi-Fi networking. Contributing to the model's ease of use is a central 2.5-inch color LCD that lets you perform basic image editing tasks through logically laid-out menu options. This is the same screen found on the MP500; it is smaller, though, than the MP950's stunning 3.6-inch display, which is geared more toward the photo buff.

Built-in media card slots sit behind a hinged door at the lower right of the unit's front panel. Most digital camera memory card formats are supported, but you'll need a third-party adapter to read the xD-Picture Card, Memory Stick Duo, and Mini SD Card formats. In addition, a direct-print port on the front allows you to output straight from a PictBridge-compatible camera or DV camcorder.

The MP830 uses black, yellow, magenta, and cyan dye-based ink in addition to pigment black. Each cartridge includes a red LED that flashes when ink is running low, a feature also found on Canon's Pixma MP500 and MP950. In our tests the MP830 equaled those printers in text output, producing sleek, dark letterforms. Though the unit's graphics and photo prints featured vibrant color and deep black, we saw some slight banding, and skin tones were a little unnaturally orange.

On the other hand, the MP830 gained points for terrific performance times in our lab tests. The MP830's speeds of 2.9 pages per minute for graphics on plain paper and 1.9 ppm for a letter-size photo printed on photo paper are some of the quickest we have seen. In text printing, the MP830 achieved a rapid 8.2 ppm, bettered only by the MP950's mark of 8.4 ppm.

Furthermore, the speed and quality of the MP830's scans and copies are among the best we've seen. For instance, it scanned a 4-by-5-inch photo at 100 dpi in 5 seconds, beaten only by the Epson RX700, which took 3.6 seconds.

Although it's a little bulky, the MP830 has a strong combination of features and terrific performance, making it a worthy option for small businesses.