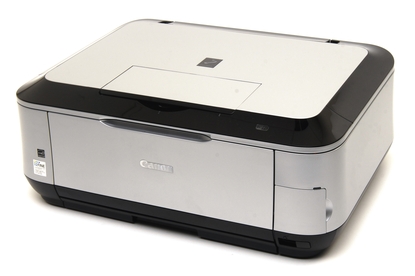 Canon's PIXMA MP640 inkjet multifunction offers network connectivity, a sizeable colour LCD and USB flash drive support. It's not a fast printer, but you can expect the same excellent print quality you get from other Canon inkjets.

Canon's PIXMA MP640 inkjet multifunction improves on its predecessor — the PIXMA MP630 — by adding network connectivity, USB flash drive support and a bigger LCD display. This inkjet multifunction retains the same excellent features, ease of use and great print quality of the MP630 — and the same slow print speed.

The Canon PIXMA MP640 inkjet multifunction retains the same shapely figure of the PIXMA MP630, complete with the silver-and-black colour scheme. A closer look reveals some cosmetic changes; for instance, there is now a small Wi-Fi logo that lights up when wireless networking is activated. The button layout has also been slightly redesigned, but the control panel's centrepiece — Canon's Easy Scroll Wheel — remains. The colour LCD screen is now 3in instead of 2.5in, making it easier to view and edit photos from a memory card.

Along with plain old USB 2.0 and infrared (for archaic mobile phones and notebooks), you get Ethernet and Wi-Fi connections and you can even add Bluetooth connectivity through an optional accessory. The integrated card reader supports CompactFlash, SD, MemoryStick and MemoryStick Duo. The PictBridge-capable USB port can read from flash drives as well — a first for Canon printers. Unfortunately, the port is recessed, making it difficult to insert awkwardly shaped flash drives. You can scan to and print photos from connected flash drives, but the PIXMA MP640 lacks support for printing even the simplest documents or PDFs directly from a drive.

The PIXMA MP640 won't allow you to use Ethernet and Wi-Fi connections simultaneously, which is a common restriction on printers and multifunctions. Inputting a wireless network password using only the Easy Scroll Wheel can be frustrating, particularly as it stops responding if spun too quickly; for the most part, however, Wi-Fi set up is quite simple. We enabled wireless scanning quickly, and a few minutes of tinkering with the one-click preferences in the bundled MP Navigator software meant we could initiate direct-to-PC scanning options from the PIXMA MP640's control panel. However, we did find it more difficult to set up printing over both Ethernet and Wi-Fi using Mac OS X 10.6 Snow Leopard. Though Canon already offers a driver for the new operating system, it refused to install, and our testbed wouldn't recognise the multifunction in Apple's Bonjour network discovery search over Wi-Fi.

Canon packs plenty of features into the PIXMA MP640, including direct CD/DVD printing, an automatic duplexer and the ability to edit photos directly on the multifunction. If you want better photography features, like a 35mm slide and negative scanner, you'll have to upgrade to Canon's upcoming flagship model, the PIXMA MP990.

The PIXMA MP640 makes use of five ink cartridges, each of which costs $22.95. Based on Canon's current page yields, we calculated a consumable cost of 21.7c per A4 page, which is slightly more expensive than the PIXMA MP630 as well as other multifunctions at the same price point.

Print speed isn't paramount for a home multifunction, and the PIXMA MP640 is one of the slowest printers around. Thankfully, even draft documents are much more readable and usable than those produced by some faster printers.

Print quality overall is quite good. Text documents from the PIXMA MP640 were very readable, though our 7pt text test document appeared slightly blurry. Documents with colour graphics appear inky straight from the printer but, once dry, look balanced. Oddly, we found the PIXMA MP640 actually produced better results using default quality settings than when using the best possible print settings. Regardless, photos are detailed and vibrant, and blacks are very crisp.

Despite some issues when printing very small text, the PIXMA MP640 is an excellent choice if you're looking for a feature-packed multifunction printer that will produce excellent output.