A lack of notable improvements. 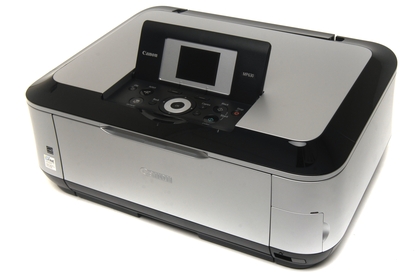 The PIXMA MP630 is little more than a refresh of the MP610 with no changes other than slower print times. While it still has some merit, this unit isn't up to the regular Canon quality level.

The MP630 makes no notable improvements on the PIXMA MP610 and it has a slower print engine, making it sluggish and more cumbersome overall.

It has the same basic style as most of Canon's PIXMA range. A silver body with black trim dresses a tall but narrow body. The unit's flip-up control panel forms the centre of the design, with a 2.5in LCD panel and a minimalist control scheme that includes a great Easy Scroll Wheel.

The MP630 boasts a card reader with support for MemoryStick Duo, SD, xD and CompactFlash media cards, and a PictBridge-capable USB port. Auto-duplexing is also a feature.

The build quality of Canon's previous multifunctions has mostly been without reproach, but the MP630 unfortunately bucks the trend somewhat. The unit's inner cover is the biggest indicator of this: opening it to replace ink cartridges isn't as smooth as we have found with previous models. The hinge is quite restrictive and the amount of space in which to put the cartridges seems to have decreased significantly since the PIXMA MP610. This may be due to the shift in consumables to Canon's new 520/521 range,

The MP630 is one of the slowest multifunctions we have reviewed. Draft text documents print at an average of 10.3 pages per minute, with the first page out in 12.4sec. It managed to print normal quality text documents at 7.3ppm. Colour documents with graphics printed at 6.6ppm using draft quality and 3.5ppm using normal. Surprisingly, 4x6in photos were quite fast, at 17.8sec per photo, and A4 photos were similarly fast at 49.3sec. Overall, however, these speeds indicate an extremely slow print engine compared both to the PIXMA MP610 and to competing multifunctions.

Thankfully, despite the slower printing and change in consumables, the MP630 retains the same great quality synonymous with the PIXMA range. Text is clear and accurate, with unusually fine detail for an inkjet printer. Colour is vibrant and precise. Photos do not give any indication of banding or gradation problems, and they even escape the problem with ink roller marks that we found on the Photosmart C5380. Yellows are particularly vibrant and the MP630 is able to produce an accurate purple (a colour that other multifunctions often have problems with).

The MP630 employs the same direct CD/DVD printing technique as all other Canon models, with a removable plastic CD tray. Although there is nothing wrong with this, the methods used by the Epson Stylus Photo TX800FW and HP Photosmart C5380 are better.

The comprehensive software suite for CD/DVD printing and the print quality are both commendable. Results are highly dependent on the quality and type of media used, but the matte CDs we put through the MP630 showed that the multifunction could produce accurate if slightly under-saturated colours.

Scanning had opposite results, with highly saturated colours. This was a particular problem when scanning text that had a coloured background. The detail and quality of sources are generally retained, though we would have preferred a more balanced colour output.

Unfortunately, the MP630 doesn't make things any cheaper either — not only is the initial outlay more expensive than the PIXMA MP610, but consumables are more expensive too, at 18.9c per A4 page. The MP630 is a capable performer but its slower print engine and a higher running cost means it is inferior to its predecessor.