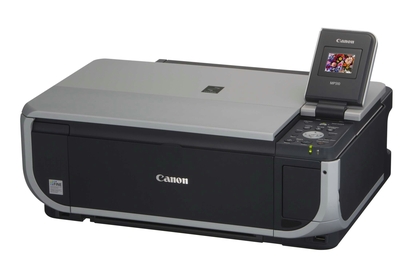 The Canon Pixma MP510 makes an excellent choice if you're looking for a straightforward printer/scanner combo capable of printing good-looking photos, though its colour LCD could be bigger.

This general-purpose all-in-one prints high-quality photos at an affordable price.

Canon's Pixma MP510 is an affordable combination of printer, scanner, and media card reader. The $179 model lacks the frills that come with many multifunction printers, such as film scanning and faxing, but you can get the basics done quickly and with a minimum of fuss.

A flap to the right of the printer folds up to reveal the control panel. The 1.9in colour LCD is smaller than that of many competing models. The printer also lacks the iPod-like Easy-Scroll Wheel that Canon is introducing with most of its latest printers, including the MP600 and MP960 models we also reviewed recently. The MP510's in-printer editing functions are limited to automatic photo optimisation and face-brightening options, which don't require the larger screens and fancier controls of its pricier siblings. If you expect to work mostly from your PC, then the LCD size and controls are largely irrelevant.

The two media slots, which sit behind a door on the front panel, accept most types of digital camera memory cards, but you'll need a third-party adapter to read xD-Picture, Memory Stick Duo, and Mini SD Card formats. The PictBridge port, for printing directly from compatible cameras, is hidden beneath the media-slot door in the recessed base of the unit, making it a little difficult to access. Unlike several rival MFPs and many photo printers, the MP510 doesn't let you read images from a USB flash drive attached to its PictBridge port. However, you can attach an optional Bluetooth adapter (at an extra cost) to print from suitably equipped camera phones and PDAs. The MP510 also sports an infrared port that lets you beam images from many mobile phones.

The MP510 lacks an automatic document feeder, so you must scan each sheet (up to letter-size paper) one at a time from the platen glass. Two separate 150-sheet trays hold paper for printing: a cassette in the base and an upright feeder at the rear, which is convenient for swapping among different sizes of photo paper. Each of the printer's four-ink cartridges incorporates a red LED that flashes when the ink runs low. The device uses a pigment-based black ink to produce darker text on plain paper.

In our lab tests, text looked dark and solid, though the characters' edges could have been crisper. Line art was sharp, but we saw wide banding across the page and diagonal interference patterns in blocks of closely spaced lines. On plain paper, graphics appeared grainy with overly bright colours and posturised blacks. However, the MP510 printed superb-looking photos on Canon's Photo Paper Pro; they looked very sharp, with bright colours and plenty of shadow detail, though skin tones seemed a little too orange. Scans and copies scored well across the board for an MFP in this price range, with no notably strong or weak points.

Against the clock, the MP510 showed solid performance. On plain paper, it printed slightly above average at 8.2 pages per minute (ppm) for text and 3.3ppm for graphics. It printed our test photo on letter-size photo paper in a commendable 40 seconds. The MP510 scans quickly, completing our test scan of a 4x5in photo at 100 dots per inch in only 7.1 seconds. Its 5ppm average copy speed is among the fastest showings we've seen for an inkjet MFP.