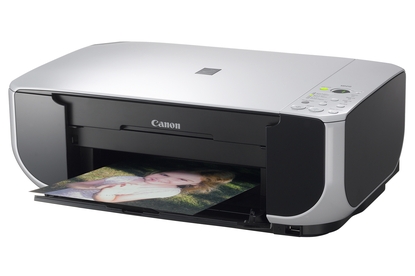 The Pixma MP210's real attraction is that it offers extra functions beyond printing for a printer-like price. But if your copying needs extend far beyond the occasional, look for a model that has better capabilities and controls, such as Canon's Pixma MP470, which costs only $60 more.

Canon's Pixma MP210 multifunction printer costs $89, as little as an entry-level, single-function printer. Because its copy functions are so limited, however, serious multitaskers should look elsewhere; and novice users may pause at its inscrutable control panel.

Installing the MP210 via the included CD is nearly automatic. The documentation is mostly good: a detailed poster guides you through the setup process, and a quick-start guide describes the machine and its major functions. The HTML-based on-screen manual is thorough, but because it covers two similar models it can be confusing.

The Pixma MP210 performed competently in our tests. It printed plain-text documents at 8.6 pages per minute (ppm). Letterforms looked nicely dark, but a little fuzzy at the edges -- a detriment to intricate or closely spaced fonts. Its speed in printing various graphics ranged from 1.5 to 4.1ppm -- about average overall for the category. The images sometimes looked faded and vague on plain paper, but using Canon's own papers made everything crisper and brighter (albeit at a much higher cost). Scans proceeded quickly and looked good overall. The cost per page (at 5 per cent coverage per colour) is reasonable: about 13 cents for black-only, or 26 cents for a page with all three colours plus black.

The machine's breadbox-like profile looks neat, but some aspects could be improved. To use the machine, you pull the input slot's two-part, hinged guide up from the back, and flip the output tray from the front. The trays are flimsy and tend to rattle. The ink-cartridge bays seem carelessly designed, as their shallow slots provide minimal guidance for seating the tanks correctly.

The control panel suffers from a shortage of visual cues. Even though the 'Scan' button is labelled, it's hard to find because it's the same size and colour as less-important buttons. The buttons labelled 'Black' and 'Color' are for copying, but the vaguer word 'Start' sits above them instead. An LED cluster with an adjacent '+' button is not otherwise labelled, even though it has multiple roles (such as showing the number of copies, or displaying single-letter status codes), none of them obvious. You press an unlabelled button to toggle among three different media types; a small light next to each shows which is chosen, but nothing indicates that this is a copying option.

Unhelpful controls aside, the copying options themselves are limited. You cannot reduce or enlarge, only fit to page automatically using a button. You can choose high-speed copying (on letter or A4 paper only) by pressing longer on the 'Black' or 'Color' button. You cannot alter the brightness of a copy, and the maximum number of copies is 20. At least copies come out reasonably fast and look pretty good.