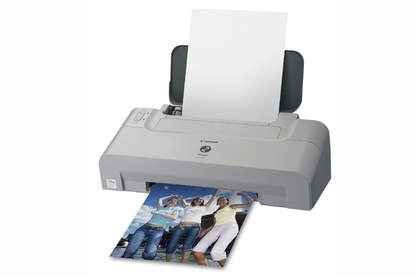 This simple, inexpensive, and compact home printer is adequate for everyday printing tasks, but its print quality could be better.

The Canon Pixma iP1600 will appeal to anyone on a tight budget. It comes in a neat little package and is simple to use, but this no-frills printer sacrifices several features we'd expect to see even in a low-cost inkjets. Most obviously, the iP1600 lacks an output tray, instead ejecting printed pages straight onto your desktop.

In the absence of a PictBridge port or card slot on the printer, digital photographers must load their images the old fashioned way - onto a PC - before printing. And whereas its larger cousins (such as the Canon Pixma iP4200) align their heads automatically as they print a test sheet, you have to check the quality manually for the iP1600 and enter a sequence of numbers into the driver's alignment tool.

The two ink cartridges--one dispensing all three dye-based color inks, and the other containing a pigment-based black for dark text--have relatively low capacities, undermining to some extent the printer's low purchase price.

For such a low-cost printer, the print speeds of 6.6 pages per minute for text and 1.9 ppm for color graphics are impressive. Unfortunately, the iP1600's print quality was less than dazzling. Text smudged across the page, and the characters' edges looked fuzzy. In our line art test, vertical lines wiggled about every third of an inch, suggesting that alternate sweeps of the head were misaligned. Blocks of fine, closely spaced lines exhibited an odd diagonal banding. On plain paper, our color images stood up reasonably well to the competition, despite suffering from some banding and oversaturated colors that gave faces the appearance of having a fake tan. Faint narrow banding remained on photo paper, and dark areas looked washed out, but we also saw some sharp detail. Our grayscale image showed appealing contrast and crisp edges, though skin tones could have been smoother.

The iP1600 comes with a user's guide in HTML format, which you install along with the software package. The capable Easy-PhotoPrint tool guides you through printing photos and making basic enhancements. Easy-WebPrint works around Internet Explorer's printing limitations by fitting pages to the width of your paper. Strangely, though, Canon neglects to include its PhotoRecord app for printing photo albums.