Mini-DV for shoppers on a budget 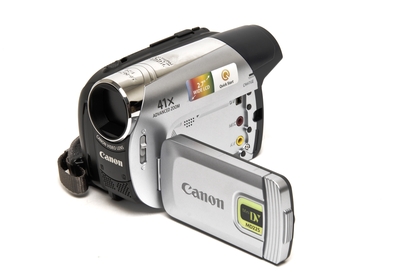 The MD225 is a decent MiniDV camcorder that will give entry-level users little to complain about. The lack of a still image mode and memory card slot may put off some users, but at this price it remains a reasonable option.

The MD225 can be seen as a MiniDV equivalent to Canon's DVD-based DC310. Despite adhering to different recording formats, both camcorders are very similar in terms of performance and specifications. The DC310's 1/6in CCD sensor and 41x optical zoom have been reproduced here, along with many of the same modes and features. However, the omission of some of the DC310's finer selling points — including a still image mode and memory card slot — has slightly diminished this camera's value. Nevertheless, it remains a reasonable option for casual shooters on a budget.

One of the primary attractions of this camcorder is undoubtedly its ultra-powerful magnification ability. Like the DC310, it comes equipped with a 41x optical zoom lens, which should ensure that you're never too far from the action. However, it's important to note that a tripod might be necessary while shooting at 30x and above; especially if you decide to bring the 2000x digital zoom into play. Otherwise, your footage is likely to look quite shaky and amateurish (a situation which isn't helped by the camera's rudimentary digital image stabiliser). As with anything else, plenty of practice is required to help you 'smooth' out this problem (sorry).

With its low-grade CCD sensor and 800k pixel count, the MD225 was never going to impress hugely in terms of image quality. However, when you consider its 'bottom rung' status and sub-$400 price tag, it is actually a pretty good performer. Naturally, the camera worked best in bright, sunny environments, where images remained crisp and clean, with only minor blurring. Fans of ultra-vibrancy will not be bowled over by the dull colour reproduction, though the colours themselves remain fairly accurate. Provided you aren't expecting miracles, the MD225's output shouldn't disappoint.

We were pleasantly surprised by the inclusion of a microphone jack on this model. This is rare for camcorders in this price range and something that audio buffs will be sure to appreciate. However, the lack of an accompanying headphone jack makes it impossible to monitor sound while recording. Plus, if you're the type of videographer who owns an external microphone (many of which cost more than the MD225), then you're unlikely to want a budget-level camcorder such as this. We feel that this feature will be a waste of time for most users, who will be happy to stick with the front-mounted microphone.

Apart from the microphone jack, the number of connections on the MD225 is surprisingly sparse, even for an entry-level camera. Like the DC310, there are no dedicated USB or FireWire cables included in the sales package, with a single AV cord supplied instead. This wasn't much of an issue with the DC310, which recorded data directly to DVD, but for the MD225 it is a frustrating omission. Most users will need to transfer their footage to a computer before it can be burnt to disc — a process that will be made unduly difficult by the lack of relevant cables. We think that Canon should have left out the microphone jack on this model and supplied better out-of-the-box transfer options instead.

Another notable omission is a still image mode. This is something that practically every other camcorder on the market offers and its absence is bound to chafe with entry-level users. We can understand why Canon left out this feature — storing images on tape is less than ideal, after all — but it remains a significant shortcoming. The design of the MD225 is not too dissimilar from Canon's previous MiniDV units, which is to say it's rather bland (silver finishes are so 1999). The build quality is quite solid for the asking price, however.