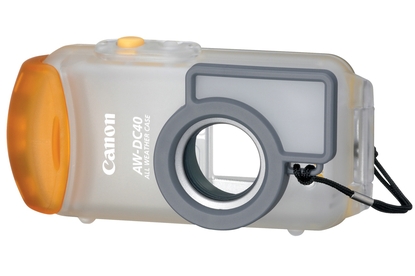 One complaint we have, however, is that the silver sections feel a little flimsy in comparison to the rest of the body. Their shiny finish also had a nasty habit of picking up fingerprints and marking easily, which meant after just a few hours use the previously immaculate chassis appeared grimy and dull in comparison. Overall, the camera feels reasonably solid and sits well in the hands.

The IXUS is a mixed bag when it comes to features. It falls short of full manual control with regards to aperture, shutter speed and white balance, but offers a nice selection of shooting modes, particularly the My Colour menu, which allows you to highlight certain colours and bring the most out of your various subjects. It also offers unlimited continuous shots (until your memory fills up) but doesn't offer too much in the way of scene shooting modes, with just a handful of the basics such as landscape and portrait.

A simple button layout grants access to all these functions. We really prefer the more minimal approach taken here to the older, clunky function wheels, which can be difficult to navigate and often the first part to break.

The IXUS has a simple, three-way switch to navigate between photo, video and playback modes, and the rest of the options are handled through the function and menu buttons below the directional pad. The layout is perfect, and allows easy and natural access to all the buttons despite being confined to a cramped space.

The pictures taken by the camera were reasonable. Our test shots were quite blurred around the edges, which is a common problem in many compact cameras, but not bad enough to be really noticeable. The photos also looked a little grainy in detailed areas.

We found the fact that the camera must be on a cradle to transfer files to the PC and to charge quite irritating. Lugging around a cradle, even one as small as the one that comes with the IXUS, is a pain.