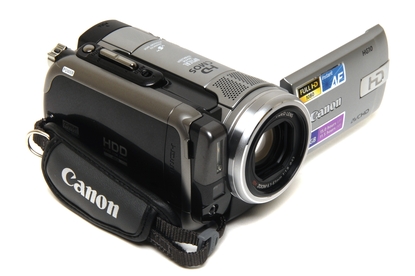 A great all-round camera, the HG10 is streamlined towards delivering high quality video in ideal conditions. The lack of manual controls may frustrate advanced users, however most will find it to be an excellent camcorder.

Canon's new HG10 is a 40GB HDD-based, 1920x1080 resolution camcorder. Coming at a respectable price point for a high-definition video camera, the HG10 delivers great quality recording along with a useful, albeit at times limited, feature set. One of the better HD camcorders that we've seen, its functionality and ease of use make it a solid choice for a wide variety of users.

Video quality is very impressive, delivering clear, sharp images along with rich and accurate colour reproduction. Although it boasts impressive performance in brightly lit, steadily shot conditions, we did notice that quality suffered slightly in low light or high motion environments. Noise was more prominent in our motion and low light tests, and in low light conditions colour reproduction was affected, with greens becoming slightly more prominent and reds tending to be a little more faded.

This issue is to be expected with the vast majority of digital camcorder, although with the HG10 it is somewhat compounded by the relatively slim manual control settings, which are limited to auto white balance. A front-mounted lamp is provided to help illuminate close up objects in low light settings, but unfortunately distant objects may prove more challenging. A variety of image effects are also available. Despite the lack of manual focus, however, the autofocus is incredibly responsive and performed exceptionally in all our tests.

Despite being primarily a video camera, the HG10 includes a highly functional still image capture option. Unlike many other camcorders, the HG10 images can be captured whilst filming, a useful addition which prevents the necessity of using a computer to extract a still from a movie scene. Images can be captured at up to 3 megapixels, and are of decent quality considering the camera's design as a predominantly video model. An additional high speed continuous shooting mode adds more functionality.

The on-screen interface is simple to navigate, and intuitively laid out. A scroll wheel to the left of the screen makes navigation easy, and the relatively small number of features helps to keep the menus simple and free of clutter.

Canon has implemented a standard and highly effective design with the HG10. Because of its HDD, it's slightly bulkier than a DVD or MiniDV model, but still sits comfortably in the hand, with all buttons in easy reach of the fingers or thumb. Even with the included battery, it's quite light. Our only qualm with the design is that the Quickstart button (which provides a 'startup' from standby mode of less than one second) isn't accessible with the right hand, but ultimately this is of little consequence.

The HG10 can be connected to a TV set via either HDMI or component cables, as well as composite, or to a PC via USB. No FireWire connections are available, although microphone and headphone jacks are both present.

Overall, the HG10 is a highly impressive camera. Definitely geared more towards the home user, rather than the professional, it nevertheless delivers excellent quality and a wide range of versatility, along with an easy-to-use interface. Despite a few drawbacks, it's nevertheless worth considering for anyone in the market for a high-definition camcorder.