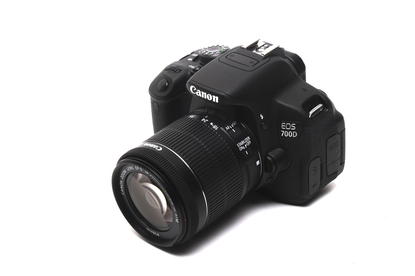 The Canon EOS 700D isn't a major step up from the 650D, but it's definitely a very good camera. It's capable of capturing high quality images, it's relatively easy to use and it doesn't feel heavy in the hand, especially with the 18-55mm STM kit lens attached. It's not a model to upgrade to if you already own a 650D, but if you're new to digital SLRs or want to upgrade from an older entry-level EOS model, go for it.

If you're looking for a simple digital SLR camera, perhaps even your first digital SLR camera, Canon's EOS 700D is ideal. It comes in a relatively small size, it has an easy control scheme, and it will allow you to take impressive photos from the get-go.

The technical specs are what you would expect of a new model, which is to say it has a large megapixel count (18 megapixels), it can record Full HD video, and it comes with a hinged screen that supports touch. The body has a soft texture that feels good to hold and it's relatively small overall. When coupled with a not-at-all-heavy lens, such as the 18-55mm kit lens (image-stabilised and with a stepping motor for smooth and silent focusing), the EOS 700D will end up feeling very light in your hands — at least for a digital SLR.

Its control layout is simple, and there are a couple of different ways you can adjust settings: either use the physical buttons, or use a combination of the buttons and the touchscreen. We stuck with the physical controls for the most part, but had a go at tapping the screen to change settings from the 'Q' menu. The 'Q' menu has a dedicated button, which, when pressed, provides practically all the changeable settings you need on one screen. You can simply tap any of the settings to change them.

Physically, the camera has buttons for ISO speed, changing focus points, exposure/focus locking, switching to live view, and a button for changing between the aperture and shutter values when in manual mode. There is one control dial near the shutter button for changing the shutter and aperture values. There is also a usual 5-way controller, which can be used for navigation when in the 'Q' menu, and the buttons for the 5-way controller also provide easy access to white balance, drive mode, focus mode and creative modes.

If all that means nothing to you, then don't worry because you can still use this camera easily by placing its mode dial in auto mode or in one of the scene modes, which will allow the camera to do all the heavy lifting. But if you're a beginner who wants to learn, then we think you'll find the physical controls, and especially the 'Q' menu, relatively intuitive. Some of the auto modes, such as 'Creative Auto', even have built-in aids for achieving goals such as a blurred background or different colour styles. It's a fairly basic aid though, and not as good as what we've seen in some Sony cameras, for example.

We used the camera primarily in manual mode, but also in aperture priority and shutter priority modes. In manual mode, changing aperture and shutter values on-the-fly isn't as easy as it is on a higher-end digital SLR, which usually has two control dials. This is mainly because you have to already have your thumb on the button for toggling between the aperture and shutter speed — or at least know where this button is without having to look for it. Once you get used to the camera though, this becomes second nature.

The built-in optical viewfinder is a little smaller than what you would find on a more expensive digital SLR, and it doesn't quite give a 100 per cent view of what the lens is gong to capture (the specs list it as covering 95 per cent). It's only a minor detail, but if you're trying to frame a picture perfectly, you might end up with some details added in to the sides of the frame that weren't there in the viewfinder. You can also use the LCD screen to frame your photos in live view mode, and the hinge allows you to position the screen in ways that allow you to frame shots at awkward angles, especially down low (great for capturing ground flowers, for example) or up high (shooting over a crowd, for example).

We found the overall speed of the camera to be very good considering it's an entry-level model. Focusing with the 18-55mm kit lens was quick and smooth (although its accuracy was sometimes off depending on the depth of field), and shot-to-shot speed was excellent. You can use this camera's burst mode for objects that are hard to capture and which may require a steady stream of shots (such as raindrops hitting a window sill, or a sports person making a move, for example). We clocked it at just under 5 frames per second during our tests, using a Class 6 SD card and capturing in JPEG mode.

Not only it is a quick camera, its 18-megapixel sensor is also capable of capturing images clearly and with vibrant colours. We shot in JPEG mode rather than RAW, and we found that we only had to adjust the levels of some photos that we captured in manual mode. The camera did a good overall job of exposing a scene, only blowing out highlights in some very sunny conditions.

You can shoot in dim lighting conditions by increasing the ISO speed up to around ISO 1600 and still get decent results. That said, if you don't plan on cropping your photos much, printing them at a large size or viewing them at their native size on a screen, then you could even use ISO 3200 to good effect. At ISO 6400, images will start to look a too messy.

Overall, the Canon EOS 700D is a good entry point if you're after a relatively versatile digital SLR camera. It handles well, its image quality is great, and it's quite fast. That said, it's practically identical to the EOS 650D as far as performance is concerned. There are some minor differences though: Canon says that the coating of the body camera is a little more durable, and the mode dial now spins 360 degrees, making it easier to change modes without having to turn it in the opposite direction. Live View allows you to preview creative modes before you take the picture, and another difference is that a kit with an 18-55mm STM (stepping motor) lens is available. STM lenses are quieter and smoother when it comes to focusing, and they are said to be better suited to shooting video than lenses with harsher motors.

Here are some more photos taken with the EOS 700D. All photos were captures with the 18-55mm kit lens unless otherwise noted. Some photos have been cropped a little, and some have had levels adjustments as per the caption. All were shot in manual mode (unless otherwise noted) and re-sized to fit the format of this page.