12.1 megapixel SLR with a host of new features 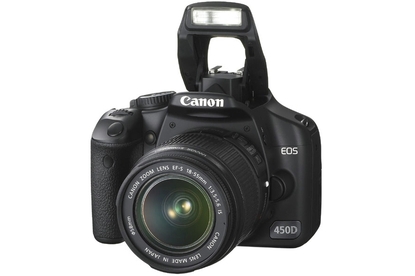 A solid improvement on the EOS 400D, Canon's EOS 450D adds a bucket-load of new features, including 14-bit A-D, a faster burst mode and Live View. Sitting in between the 400D and 40D in price, it offers a compelling option for users looking for the middle ground between the two.

With the release of its latest SLR, the EOS 450D, Canon has created an interesting dynamic in its product range. While it is only slightly pricier than the high-selling EOS 400D, which sits at the base of its line-up, the EOS 450D packs in several new features. These include Live View and a 14-bit A-D (analogue to digital converter), which were found on the recently released mid-range unit, the EOS 40D. Sitting at a price point somewhere between the two, the EOS 450D provides a compelling option for those looking for something a little above entry level.

One of the most noteworthy features of this model is Live View, which is becoming increasingly prevalent in SLRs. Canon's implementation uses the main sensor, which means there is a noticeable delay and noise when focusing because the mirror must flip up and down. Alternatively you can use the contrast detect focus mode, which won't move the mirror and interrupt the image but will take even longer.

While this form of Live View isn't as quick and speedy as that found on some competing units, it has the advantage of offering 100% coverage of your target as well as depth of field preview. We can see the uses for this mode, particularly for those hard to reach or particularly precise pictures, but there is a way to go before it becomes widely used. We'd also have liked to see a moveable screen to better take advantage of this feature.

Another improvement is the CMOS sensor, which has been boosted up to 12.1 megapixels. While the difference in most scenarios is fairly negligible, it will give this camera a slight edge in extremely large prints.

Its performance in our image quality tests was impressive, as you'd expect. The sensor captured crisp, sharp images with plenty of detail and excellent resolution. We felt the default balance could have used a little extra sharpness at times, with a slightly soft look evident at times. Overall the clarity is what you'd expect from a camera of this calibre.

There was some minor haloing on high contrast edges in our indoors shots, indicative of chromatic aberration issues, but it wasn't too severe. On the plus side, there was no purple fringing outdoors and corner softening was kept to a minimum.

Colour and exposure were both handled very well. The camera's 14-bit A-D means even more information is captured in any one shot. The result is extremely bright, vibrant colours and better detail in dark and light areas. This is particularly beneficial to people who do a lot of post-processing, as there is more information in the RAW files for them to extract a better picture.

One of the 450D's strongest areas of performance was in our noise tests; the full range of sensitivities produced perfectly usable images. At ISO 100 our shots scored some of the lowest results we've seen in Imatest; even up to the maximum of ISO 1600 pictures were clean and only vaguely speckled. This unit definitely outperforms some of the competition in this regard.

Speed-wise this unit performs superbly. The quoted 0.1sec start-up time is fairly accurate, and shutter speed and shot-to-shot time were both almost non-existent. The burst mode operates at roughly five frames per second, and the overall user experience is speedy and intuitive.

One factor contributing to this is Canon's decision to give important features their own buttons. Things such as ISO sensitivity, white balance and autofocus mode can all now be accessed instantly via their own dedicated keys on the back of the camera. This makes everything a little simpler and is extremely easy to use.

Aside from Live View, the other notable feature of the 450D is its dust reduction technology. While not quite as effective as Olympus's system, something is better than nothing, and it does a decent job of eliminating dust particles. Mirror lock-up is also included, which is a nice addition and something that is missing from a couple of competing units. Finally, while not bearing sensor based stabilisation like Sony's latest SLR the Alpha A350, the 450D's kit lens (18-55mm) does carry onboard optical image stabilisation.

The 450D's design is reasonable without being outstanding. It sports the same mostly plastic build found on the EOS 400D, rather than mimicking the more robust and sturdy EOS 40D. It is tough enough to take on the road with you, although those regularly shooting in harsh conditions will prefer its more rugged and expensive sibling. That said, the mostly plastic body is quite light, which will suit frequent travellers.