An easy to use, budget DVD camcorder 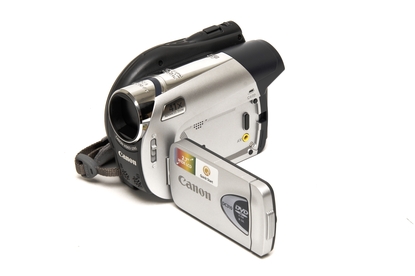 The DC310 is a solid DVD offering let down by the limitations of its format. Casual users who want quick access to their home movies will be quite satisfied. Everyone else, on the other hand, should stick to flash memory or MiniDV.

If you're looking to buy a standard-definition camcorder and find the idea of 'instant' DVDs intriguing, then the Canon DC310 is as good an option as you're likely to find. With its powerful zoom lens, multimedia card slot and easy-to-use interface, it should satisfy its intended market of amateurs and beginners. At just under $500, it is attractively priced, costing $159 less than Panasonic's similarly specified VDR-D50 model.

With all that being said, DVD camcorders are clearly not suited to everyone's taste. The usual limitations of the format naturally apply. These include short recording times, hamstrung editing opportunities and ailing support from vendors. If you're willing to overlook these substantial shortcomings, the DC310 remains a solid performer for the asking price.

The Canon DC310 records standard-definition video to 8cm DVDs, which are basically miniaturised versions of standard DVD discs. A dual-layer DVD-R disc can store up to 108min of video at the lowest setting. This compares favourably with MiniDV camcorders, but falls short of camcorders based on removable flash memory and hard disk drives. The market has well and truly shifted away from disc-based media, which means camcorders like these are in danger of becoming obsolete. This is something to be mindful of if you like to future-proof your products.

Apart from the ability to record video to DVD, the DC310's main selling point is probably its massive 41x optical zoom. This is quite impressive even for an entry-level camcorder, which typically have extra-powerful zooms. A 2000x digital zoom is also included, though this is basically unusable and is best ignored. Unfortunately, the lack of an optical image stabiliser may cause your footage to look quite shaky when zoomed out at the maximum setting. We therefore recommend getting in plenty of practice, or better yet invest in a tripod before committing video to disc.

Equipped with a single 1/6in CCD sensor with a maximum resolution of 1.07 megapixels, the DC310 is unable to compete with the latest high-def cameras — but for a sub-$500 camcorder, it performed quite well. Pictures remained sharp and reasonably vibrant in bright environments, with the CCD sensor capturing plenty of fine detail. The autofocus proved to be quick and reliable, which will be a big plus for first-time users.

Naturally, the camera's low-grade sensor struggled in dim lighting, returning poorly coloured, noise-filled results. The average user should be able to live with these shortcomings, as they won't be attempting to capture award-winning video. So long as you can see your sleeping baby (or whatever you happen to shoot at night), who cares if the footage is a bit grainy? If you agree with this sentiment, the DC310 should not disappoint.

Using the device is relatively straightforward, with Canon's tried-and-trusted directional stick employed for menu navigation. The range of manual options on offer is quite extensive, including 12 scene and effect modes, three AE Program modes, 11 separate exposure levels, adjustable white balance and manual focus, image quality adjustments and a built-in flash for still photography. The DC310 also comes equipped with a multimedia/SD/SDHC memory card slot, but this can only be used for capturing and storing photos.

As we mentioned earlier, one of the main caveats of the DVD camcorder format is the difficulties in editing your video. In the DC310's case, this problem is further exacerbated by its limited connectivity options. While we weren't expecting an external microphone jack or fancy HDMI port, the camera is equipped with just a single AV output. This could prove especially annoying if your computer lacks an inbuilt card reader because you will need to transfer your memory card to a digital still camera or other compatible device.