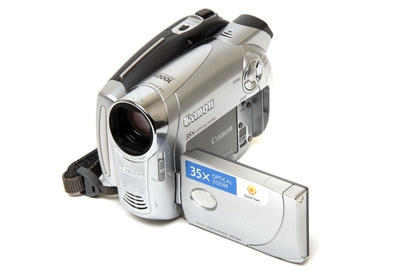 If you really must own a DVD camera and don't have a tonne of money to spare, you could probably do a lot worse than this cute budget offering.

While they will never be loved by any self-respecting videophile, DVD camcorders continue to attract plenty of buyers, even in the face of newer and superior technology. Perhaps it's the convenience of slotting a disc straight into a player, or the comforting familiarity of the 'DVD' brand name. Whatever the reason, the format continues to go from strength to strength, and with the advent of Blu-ray and HD-DVD models, it appears to be here to stay.

If you've yet to make the move to high definition, there are still plenty of basic, affordable DVD camcorders on the market, of which the Canon DC220 is a prime example. Falling into the lower spectrum of Canon's DVD camera range, it combines consumer-friendly features, such as 35x optical zoom and photo capturing options, with an attractively low price tag. It accepts three-inch DVD-R/RW discs, which can store up to 108 minutes of long play video on a dual-layer disc. Naturally, picture quality is not particularly impressive on this unit, though it does fall roughly in line with most competing models.

Considering its low asking price, the DC220 is a surprisingly attractive unit. Weighing in at 500g with dimensions of 54x90x128mm, it is noticeably smaller than most DVD cameras, and the overall design is quite pleasing. It manages to buck the 'cheap and nasty' trend set by the majority of its rivals, and is actually something you can feel proud to pull out of your camera bag. We were particularly impressed by the cunning placement of the battery, which sits snugly alongside the LCD display when the screen is closed. This is infinitively preferable to the ugly black protrusions which mar the Sony and Panasonic range, although it may limit the use of larger battery packs.

In addition to looking rather stylish, the design of the DC220 also benefits from an intelligent control layout. The tiny directional stick that is synonymous with Canon cameras has once again made a return, and while we prefer the touch interface adopted by Sony, its placement is perfect for quick thumb navigation. Elsewhere, the unit comes equipped with a trio of buttons along its side (for menu access, LCD options and Quickstart mode), a photo button located on the rear, and playback controls across the bottom of the LCD display. All up, the unit should pose no problems during operation, even for technology-fearing novices.

We were particularly impressed by the zoom function on this unit, which allows optical magnification of up to 35x. Of particular note is how speedy the zoom is at its fastest setting; allowing you to get up close and personal in a matter of seconds. Another handy feature is Canon's new Quickstart mode, which behaves similarly to the standby mode on a notebook. It allows you to keep your camera constantly at the ready; without putting too much drain on the battery.

When it comes to taking still photos, Canon has gone the extra mile with the DC220, offering a wealth of options, including a dedicated miniSD card slot (card not included). The camera is also PictBridge compatible, allowing you to print photos directly from the camera to a printer. Unfortunately, with a maximum image resolution of just 1024x768, the inclusion of this feature is barely justified, which brings us neatly to the DC220's main stumbling block -- image quality.

As with any low-end camcorder, we didn't expect a lot from the DC220's video performance and were subsequently unsurprised by its decidedly average output. Equipped with a lowly 680,000-pixel CCD sensor, it failed to impress us when it came to sharpness and image clarity, although to its credit, colour reproduction remained fairly accurate throughout our testing. As expected, image quality took a further hit in low-light conditions; a problem that the rudimentary night mode failed to alleviate. Nevertheless, for a 0.6-megapixel camera, it performs about as well as can be expected and should satisfy its target audience of casual users.