BullGuard Internet Security 8.5 is a 'point' upgrade that includes a more secure firewall. 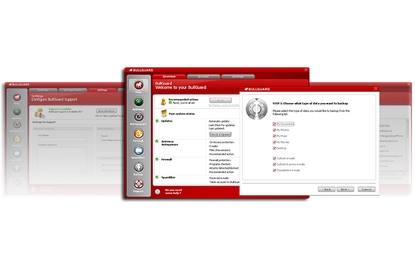 Simplicity is the name of the game with BullGuard and the new version retains this — it’s undoubtedly easy to use. It’s also improved and remains a reasonable choice for the home user. But is it as good as Norton Internet Security 2009? No.

You don't get parental controls or private data protection, so the coverage offered by BullGuard is slightly restricted compared to some of its rivals. For $89 you get an annual licence for three PCs, and extra online storage is available for extra cost. Existing BullGuard Internet Security users will be automatically upgraded to the 8.5 version.

One of the major improvements is a new more secure firewall that consumes fewer resources. It certainly is one of the easier firewalls to configure, even if you opt for the 'Advanced' view.

It can be can be set up automatically but it's also possible to go in and manually tweak it. The firewall automatically approves apps that require Internet access so no prior 'app scanning' is required; the previous version required too much user intervention. Like the spam filter, it also appears to be collaborative — unknown apps that you vouch for are reported to BullGuard.

The other major improvement is a new spam filter which claims to offer 'comprehensive phishing protection' as well as better performance. Again, the old version was less than perfect and the new version is much better.

It's collaborative so when you identify an e-mail as spam, all other BullGuard users spam filters are sent the information. Like BullGuard's anti-virus and anti-spyware, the spam filter integrates with Outlook, Outlook Express and Thunderbird, checking all incoming and outgoing emails. We accessed our spam 'honey-trap' and BullGuard's accuracy (before training) in sending spam to the Deleted folder was in the order of 99% - not bad.

On the AV front, this release offers increased rootkit detection capabilities and updates every two hours. It scans files on schedule, on demand, and on access. It also checks for viruses in incoming and outgoing e-mail.

Interestingly, BullGuard doesn't feature much in the major AV group tests such ICSA Labs, West Coast Labs or AV-Comparatives.org. It has only appeared five times in the VB100 list but v8.0 earned two 'fails' in 2008 for missing viruses in the wild list, despite being based on the well-regarded BitDefender engine, so the jury is out as to its current effectiveness against malware.