The Buffalo AirStation WBMR-HP-GN is a well priced all-in-one modem/router suitable for distributing a fast ADSL2+ connection over Wi-Fi or wired Ethernet networks. It's relatively easy to set up, but its interface could use an overhaul.

Buffalo's AirStation WBMR-HP-GN is an all-in-one home networking device. It features an ADSL2+ modem, 802.11n wireless access point and 10/100 Ethernet switch. It's a neat little device with an internal antenna and a button for one-touch Wi-Fi Protected Setup (WPS). It looks good and its wireless performance makes it suitable for a small home or apartment. However, its Web interface is a little dated and slow.

The wireless access point in the AirStation supports 802.11n, but its maximum throughput is 150 megabits per second (Mbps) — or 802.11n Lite. This is similar to the D-Link DIR-600 wireless router and the Netgear DGN1000 modem router that we recently reviewed.

The Buffalo's Wi-Fi transfer speeds in our 2m and 10m tests were quite similar — 3.31 megabytes per second and 3.23MBps, respectively — which indicates that it supplied a consistent signal throughout our test environment. These speeds are suitable not only for distributing a fast ADSL2+ connection, but also for streaming standard-definition video from your PCs. It wasn't as fast as the D-Link, which recorded 5.01MBps and 7.36MBps from 2m and 10m respectively, but it was on par with the Netgear, which recorded 3.55MBps and 2.99MBps.

To set up the Buffalo AirStation WBMR-HP-GN, you can use its Web interface, which can be accessed from 192.168.11.1 and with the username 'root' (there is no password). It's a relatively old-looking interface that can be overwhelming if you aren't well versed in setting up modems and routers. It's also a slow interface; most settings (such as port forwarding and wireless encryption settings) require a short restart. 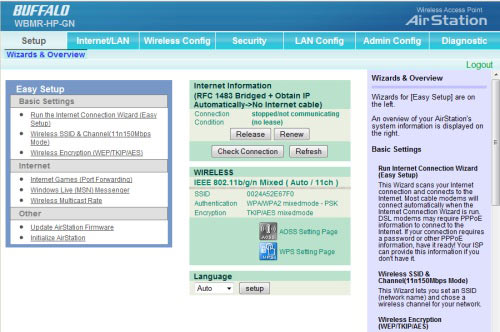 The Buffalo's Web interface is one of the busiest we've seen. It's divided into four sections: the main navigation is across the top, and there are three columns underneath that consist of wizards, access to the status page, and help information.

The AirStation can't search for firmware automatically, unlike many recent networking devices such as the Netgear DGN1000. You'll have to check for, and install, updates manually through the unit's 'Update firmware' page. The most helpful thing on the 'Update firmware' page is the link to Buffalo's Web site — but you still have to find the download section yourself. One thing we do like about the interface is the diagnostic section, which gives plenty of useful information such as your ADSL line's attenuation.

Setting up an Internet connection can be accomplished via the 'Easy Setup' part of the unit's interface, but you'll still have to know some information about your connection, such as the type of connection (PPPoE for most of us on ADSL2+, but you can also choose PPPoA or bridged mode). Once you've entered your details and saved them, the router will restart and you'll end up on the main page again; from where you'll have to decide what to do next. We proceeded to the wireless wizard. The SSID and encryption settings are on separate pages, which is annoying and the router has to restart before each setting will take effect. It's quite easy to set up, but the small delay from the restarts can be a pain.

You can click on the 'Check connection' button on the main page to check your Internet connection status.

The Internet download speed of the AirStation, as tested with the PC World Broadband Speed Test, averaged 16.450Mbps, which is a very good result and on par with the Netgear DGN1000. Its upload speed turned out to be a little faster than the Netgear: 865 kilobits per second compared to 845Kbps. It's only a small difference, but for anyone who does a lot of uploading, any gains in upload speed are useful.

For security, the AirStation features a built-in firewall and it also has an IP filter. Unfortunately, it lacks a URL or keyword filter. Port forwarding is not as intuitive as it is on some other routers we've seen, but we had no problems opening up a port to allow our torrent client to quickly download some Linux ISOs. 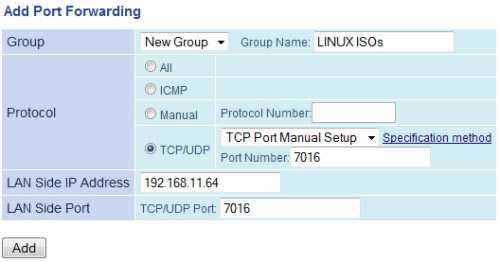 One aspect of the AirStation's design that can be frustrating is its power adapter. It isn't as small as the adapters that ship with other modems and routers we've seen (such as the afore-mentioned D-Link and Netgear models) and you'll most likely not be able to use adjacent outlets once you plug in the Buffalo. This is another case of the unit not being as modern as we'd like.

Overall, though, the AirStation WBMR-HP-GN did its jobs of connecting to the Internet and sharing files between computers quite well. It's not as intuitive as some other products on the market, but it looks nice, doesn't have annoyingly bright LEDs and its wireless performance was decent, although not spectacular, during our tests.

Buffalo's environment policy states that the company is "committed to our goals of surpassing environmental standards" and "Our efforts will focus on reducing environmental damage by complying with all applicable regulations in each country."