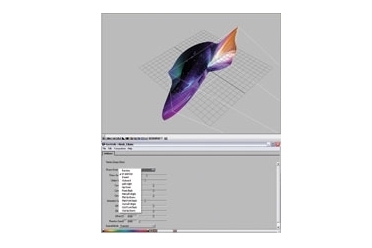 Boris Blue 2.0 offers a 3D toolset that just isn't available elsewhere. Current users of other motion graphics tools -- especially After Effects -- aren't likely to ditch their tools for Blue. However, at its new, much-lower price, Blue is a great companion tool to AE for particular projects.

Boris Blue is aimed at artists creating high-end motion graphics. It has strong competition from recently released new versions of Adobe's After Effects, Apple's Motion and Eyeon's brand-new Vision -- but Blue has a few unique tricks that are of great interest.

Boris Blue has more 3D capabilities than any of its rivals. After Effects and Motion have 3D workspaces with lighting and shadow systems, particle systems, interlocking layers and many other tools for the positioning and arrangement of 2D planes in 3D space.

Blue's toolset has all of these and a set of unique true-3D features: including the ability to import 3D models, add 3D primitives, extrude text and other vector objects into 3D space, and warp and shatter footage across the workspace. Version 2.0 of Blue doesn't add anything groundbreaking to this mix. It expands the number of 3D effects that can be applied to flat layers -- called Deformers -- increases its library of video filters, and adds some useful controls to its 3D system.

The new Deformers give you many more options over how footage, shapes and type can be manipulated and animated -- and they're an excellent addition to Blue's unique selling point.

Alongside Deformers in Blue's effects set are Image Processing Effects -- standard filters to you and me -- and effects taken from Boris FX's Continnum Complete collection, which use OpenGL to create some artistic effects. Ten Continuum filters -- from Glare and Glint to Damaged TV and Lightning -- have been added in Boris Blue 2.0, along with seven Image Processing Effects including Film Process and Glow Light.

Again these help to flesh out Blue's tools, which were rather empty before.

The only major change to Boris Blue's interface is the addition of split views in the Composite Window -- allowing you to see your scene from multiple angles in 3D space. There's a four-up option that's similar to the standard view as used by 3D suites, as it makes positioning elements in 3D much easier. An on-screen 'interactor' has been added, allowing objects, lights and cameras to be moved within the Composite Window.