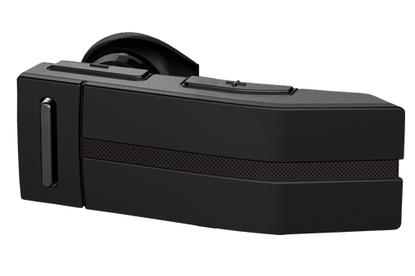 Its rugged claims may be a little over the top since it relies on the included silicon covers, but the BlueAnt T1 remains an excellent and easy to use Bluetooth headset, possessing outstanding voice quality.

The BlueAnt T1 has a fairly conventional Bluetooth headset design. It feels very workmanlike, which is no surprise given it's a ruggedised headset. The T1 headset is finished in glossy black plastic and features sharp curves and flat edges.

BlueAnt is generous with included accessories, packing in five sets of rubber ear tips in various sizes. Once we found the right sized tips, we found the T1 rugged Bluetooth headset comfortable to wear, even for long periods. The lack of an included ear hook may disappoint some users.

BlueAnt includes two interchangeable silicon covers in the sales package that are intended to protect the T1 from bumps, dust and moisture (we're not entirely sure about the last claim, as the covers don't wrap around the entire headset). BlueAnt's "rugged" claims seem to relate to the covers themselves rather than the actual T1 headset. To be fair though, the headset does feel strongly constructed and definitely capable of taking its far share of knocks even without the covers fitted.

The BlueAnt T1 Bluetooth headset is one of the easiest devices to set up, as a voice guides you through a step by step activation process the first time it is turned on. Once paired with your mobile phone, the T1 will attempt to synchronise your contacts, enabling caller name announcements — when activated, a voice will speak the incoming callers name if it is in your phonebook. If your phone doesn't support automatic contacts transfer, you can do this manually by sending one or all of your contacts to the T1 as a business card. The T1 has multipoint Bluetooth, so it can connect to two devices simultaneously, including the iPhone.

At the heart of the T1 headset is BlueAnt's BlueGenie voice user interface. Requiring no recording, training or tweaking to work, the interface responds to a range of voice commands. Operation involves pressing the BlueAnt button and speaking a command. Commands range from a simple ones like "answer" or "ignore" to others like "check battery". The BlueGenie system is simple and effective, and it recognised our voice almost every time we spoke a command.

As with most BlueAnt products, sound quality is excellent. The T1 rugged Bluetooth headset is the first to feature the company's Wind Armour technology, which the company says combines design features with noise-cancellation software. BlueAnt claims the T1 can effectively mask wind speeds of up to 35kph. While Sydney's weather didn't let us test the full extent of BluAnt's claims, the T1 definitely handles wind noise with ease. We managed to achieve crisp and clear incoming and outgoing audio even in noise in noisy environments (such as heavy traffic).